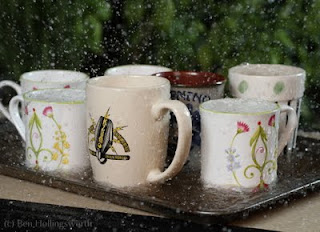 Have you ever had a friend tell you that their new point and shoot camera has a 14 megapixel (MP) sensor, so they can print professional quality shots at 16x20"?  Ever wonder why the images from your 10MP DSLR look so much better, especially when taken in lower light?  One of the major reasons is the size of your image sensor.

When an image is too dark to make a good images, you can compensate for that by increasing the ISO setting on your camera.  This basically just multiplies the number of photons that have been recorded by each photosite.  If you double your ISO, thereby multiplying the photon count by two, you would think that would have the same effect as doubling the shutter length, wouldn't you?  Well, not quite.

The problem is that photons hit photosites with a random distribution, much like raindrops hit the sidewalk.  If it rains for only a brief amount of time, every square inch of sidewalk may or may not get hit by a raindrop.  Other areas of pavement might get hit by several drops.  If it rains for a longer duration, every bit of pavement is going to get drenched.  In fact, most spots will get about the same amount of rain because, given enough time, it eventually averages out.

Photons hitting an image sensor work in the same way.  Given a long enough shutter duration, the number of photos hitting adjacent photosites eventually evens out.  For shorter durations, there can be quite a large variance in photons.  If you simply multiple those values, the difference will become even larger.  This variation in photon counts (pixel values) is seen as noise.  When a high ISO multiplies the photon counts by a large amount, you get large variations that most people know as "high ISO noise."

Take this one-dimensional example in the graphs below.  In the first image, the very narrow samples range in value from 16 to 175.  However, if those values are averaged together by combining the four adjacent values into one, as in the second image, the range is now only 53 to 107.  It's obvious from this example that averaging the values into larger buckets produces a much more consistent set of values.

So now you know what causes high ISO noise.  But how does the image sensor size affect this?

A point and shoot camera has an image sensor about the size of your pinky fingernail (5x7mm, the smallest rectangles in the image at right).  A full frame (35mm-sized) sensor on a professional grade DSLR is about the size of a large postage stamp (24x36mm).  If each of these two sensors is divided up into 14 million photosites (14 megapixels), the P&S photosites will obviously be considerably (24 times!) smaller than those on the full frame DSLR.

Let's stick with our raindrop analogy.  Imagine if you walked out into a rain shower with a cookie sheet full of upright test tubes, each only about 1/2" in diameter.  After ten minutes in the rain, some of those tubes will have caught quite a bit of water, while other tubes will catch only a few drops.  That's a lot of variation between adjacent containers, just like we saw in the first noise diagram above.

Now wring out your shirt and go back out for another ten minutes, this time with a cookie sheet full of coffee mugs, each about 3" in diameter.  Because each cup covers a much larger area, relative to the size of each raindrop, over the course of ten minutes, the number of drops caught by each cup will average out to very similar values. This is what we saw in the second noise diagram above.

Yes, there are several other factors that affect image quality, including lens quality, sensor design, noise reduction algorithms, etc.  But the size of each pixel is one of the most significant contributors.

So, the next time you're in the market for a point & shoot camera, resist the urge to buy one with the highest pixel count you can find.  With all other features (like lenses) being equal, unless you only shoot in bright sunlight, you'll get better looking photos from an 8MP camera than you will from a 14MP camera.

We'll learn more about ISO settings in all their glory in an upcoming post.

Always, I'd love to hear your questions or thoughts on the matter in the comment section below.
Posted by Obi-Wan at 12:00 PM