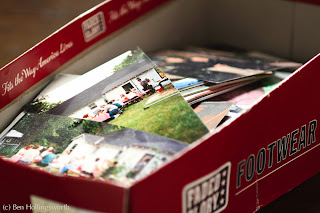 A few months ago, well known photographer Chase Jarvis posted the steps he uses to weed thousands of photos from an extended professional shoot down to just a handful of truly wonderful shots -- in just a matter of hours.  In a recent session, he culled 21,000 photos down to just 50-60 keepers in only five hours.  Granted, that was an exceptional case given the low hit ratio of the subject matter, but it's still an impressive degree of efficiency.  The key, according to Chase, is making multiple high-speed passes through your images and incrementing the star rating of appropriate images with each successive pass.

While I've been using the star rating to cull my own photos for a while now, I've previously just made a single pass through the shoot and assigned each photograph either one, three, or five stars as I encounter it.  One star means it's crap.  Three stars means the image is OK, but not good enough to send to the client for whatever reason.  Perhaps it's a great composition that's out of focus, or perhaps I already have a very similar image that's even better.  Five star images will go to the client after any necessary postprocessing.

Historical records tell me that this method allows me to cull the entire set at a rate of about 100-150 images per hour (24-36 seconds per image).  While many images are rated much faster than that, there's always some that require me to look through the rest of the collection to see if I have something similar but better, and those really throw off the average.  At a typical event, about 1/3 to 1/2 of the images generally make the cut and get sent to the client.

For my latest job, I decided to give Chase's multi-pass method a try.  This particular shoot was of a large gathering of pre-school Sunday school classes, which generated about 340 frames.  I simplified Chase's system to three passes, with the resulting images having from 0 to 4 stars.

Here's how I did it:

Set the software to show image thumbnails reasonably large.  I chose 256 pixels on the long side.  That's big enough to see the basic image structure while still fitting a couple dozen photos on the display at once.  Blow through the images as fast as possible in this step, weeding out anything that's obviously complete crap based on the large thumbnail.  Don't take the time to look at the full size version right now.  If there's any hope that this image might be usable, give it one star.  If it's obviously not gonna make the cut, don't give it a star.  Speed is the key here.  On this job, I spent 45 minutes going through 340 images (8 seconds each, including some interruptions), and bypassed 60 of those in the first pass.  Ideally, you'd weed out more images in this pass, but my subject matter this time was rather predictable and created a high keeper rate.  A sporting event would be a different story.

Filter the images so that only those with at least one star are shown.  I'm not one to ever delete an image from disc, but if you are, you could simply delete all the unstarred images at this point.  Now make a second pass through the images, this time looking quickly at a larger version of each image.  About 800 pixels on the long side fit nicely on my screen while still showing enough detail to pass judgment.  We're still moving as fast as possible, but checking for basic "keeper" requirements like reasonable (not perfect) focus and acceptable (or correctable) composition.  I did keep a few shots which were not technically great, but which had such great subject matter that I thought they might be worth trying to save in post.  Don't put a lot of thought into it -- if there's any question as to whether the images is worth keeping, give it a second star and move on.  We're still trying to move fast here.  This time, I spent about 75 minutes rating the 290 images which made it past the first pass (15 seconds each), and culled another 60 of them.

Filter the images again to show only those with at least two stars.  By now, you've been through the full set of images twice, and you should have a pretty good idea of what type of images remain (it helps if you don't wait several days between passes).  By the time you see each image the third time, you should already know whether you've got a similar image that's more desirable -- a condition which would relegate an otherwise acceptable image to the trash heap.  You should also know the approximate quality of your best shots, and can skip over those that are below par.  We're moving slower now, giving each a more critical eye and sometimes peeping at the full res image to verify critical focus and other details.  On the third pass, I assign either 3 or 4 stars to each keeper.  Four stars means the photo is pretty good as is, and will require only minor editing (straighten, crop, simple exposure) before presenting it to the client.  It also means that the subject matter is valuable enough for the client to care, in comparison to all the other images.

Three stars means that the image has some significant (but probably correctable) problem, but the subject matter is so good that it may be worth putting some extra time into trying to save this image.  If a kid gave me an awesome look that I didn't get in any other shot, but it was slightly out of focus, I'd give it three stars.  If you know that the intended use for the images is small prints or web site illustrations (as I did for this job), you have a lot of leeway in correcting imperfect focus and exposure.  I know we photographers are mostly perfectionists and are proud of our work, but many clients still care more about a great expression than image quality.  Give the client what they want.  Some of these three star images may end up being unsalvageable, but if they're worth giving it the ol' school try, then they get three stars.

The third pass will require more time per image because you're giving each a little more attention.  I spent about 30 seconds per image on this step.  I left behind another 40 images, gave three stars to 25 of them, and promoted 165 photos to four star status.

All told, I spent four hours culling 340 images down to 190 keepers.  That's about 85 images per hour, or 42 seconds per image.  This is slower than my last few jobs with my previous method, although the subject matter also resulted in a higher percentage of keepers than normal.  I suspect that once I get the hang of the new system, it will move somewhat faster for typical jobs that have a lower keeper ratio.  I think the key here is the percentage of shots that you intend to keep.  If you can weed out a large percentage of the images in the first two high speed rounds, then you'll save yourself a lot of time in the final, more critical pass.

The biggest advantage I found is that I don't get burned out like I did using the old method.  By breaking the process up into multiple, shorter steps, I feel like I'm crossing items off my list.  It's also less mentally draining to only give critical attention to half my shots rather than the whole lot of them.

A word about software:

Because I run Linux (Ubuntu), most commercial software like Lightroom and Aperture isn't available to me.  I therefore use an open source app called digiKam to handle all my image organization and ratings.  DigiKam does a great job of organizing and tagging images, and can do moderate (albeit destructive) image editing in house.  It's also completely free.

To process the images for the client, I use one of two commercial applications, again on Linux.  For quick, bulk edits, I like Bibble 5.  Bibble prides itself on its speed, and with good reason.  It can do moderately complex, non-destructive edits (NDE) on large batches of images, which is great for event photographers.  It does have its limitations, though, so for more complicated editing, I use LightZone.  LightZone is written in Java and is a slow resource hog, but its flexibility makes it the king of NDE on Linux.  Both of these applications also run on Windows & MacOS, BTW.

[Update: five months after this was first posted, LightCrafts (maker of LightZone) has gone out of business.  LightZone binaries are still available out in the wild, though.  BibbleLabs has been bought by Corel, and their Bibble 5 software has been renamed to "AfterShot Pro."  It currently costs only $60 (down from $150 under Bibble) and has a 30 day free trial (up from 14 days).]

In the very rare instance when I need to composite multiple images or do complex work with layers, I still fall back to the GIMP.  The GNU Image Manipulation Program has been around on Unix for eons, and is now also available on Windows and MacOS.  It's not as capable as Photoshop CS5, but it's not all that far behind.  It's also free software, as in both speech and beer.  I'm a big FOSS fan, in case you can't tell.

So anyway, there you have it:  my experiences with large scale image culling, rating, and sorting.  If you want to know how I organize my 100,000-photo library, read my previous post on the subject.  Postprocessing workflow is one area where I still have much to learn, so I'd be very happy to hear any comments or suggestions below.

[Update:  I posted updated info about the postprocessing software that I currently run on Linux in a later post.]
Posted by Obi-Wan at 12:00 PM