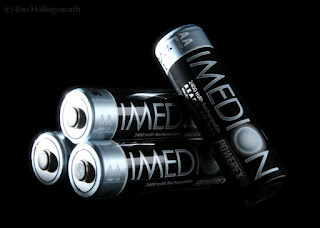 These days, almost everybody who does a reasonable amount of work with off-camera flashes has switched from traditional alkaline batteries to NiMH rechargeables.  Despite the significant up-front investment, rechargeables definitely save you money in the long run.  The first sets of AA batteries that I bought have been wearing out lately & won't hold a charge very long.  When choosing their replacements, I decided to try a new brand:  Imedion by PowerEx (Maha).  I've only used them briefly so far, but I'm definitely pleased with them.

My original sets of rechargeable AA batteries, purchased in 2008 (I date & number all of my batteries with a sharpie), were Duracell brand and rated at an excellent 2650 mAh.  Those first two 4-packs worked great, and still do today.  They used a low self discharge (LSD) technology in the days before anybody was promoting such a thing.

The 2650 mAh rating is on the high end for AA's, and means that the batteries will be able to power many pops of my speedlites with fewer battery changes.  Lower-rated batteries should work just as well when freshly charged, but won't last as long when supplying power to your devices.

When I needed more batteries in 2010, I bought four more 4-packs of what I assumed were the same battery.  Alas, these new packs, while externally identical, were definitely not of the LSD variety.  The amount of time for which they would hold a usable charge steadily declined, and today is no more than a couple days.  If I charged them all in the days right before a photo shoot, they may or may not work well for the shoot.  Spending $50 on batteries that I could barely use was frustrating, to say the least.  I finally bit the bullet recently and decided to replace them with something usable... but more on that later.

At about the same time that I purchased the second round of ill-fated Duracells for my speedlights, I also started buying rechargeables rather than alkalines for every day use around our home.  With three elementary-aged kids, we go through a lot of batteries.  I figured that, for this sort of usage, a large capacity wasn't nearly as important as the ability to hold its charge while sitting in a drawer or toy box for weeks at a time.  This is exactly what LSD batteries were made for. 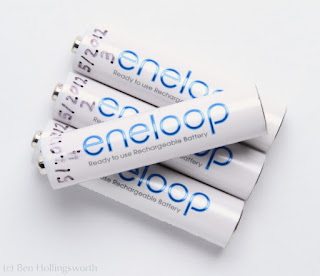 For household use, I decided to buy the battery against which all other NiMH batteries are judged:  Sanyo Eneloops.  Eneloops were one of the first brands to make a real name for themselves as a reliable LSD battery.  They're only rated for 2000 mAh -- considerably lower than my Duracells -- but they can sit in a drawer for a year and only lose 15% of their charge.  Price-wise, they're middle of the road, at about US$2.50 per battery for AA's or AAA's on Amazon.  Many people use Eneloops in their camera flashes, but when I've tried them, it's obvious that they're of a lower capacity than my eight original Duracell 2650's.  The batteries tend to run dry before my day is done.

The battery industry has produced some worthy competitors in recent years.  Some pros (including Joe McNally) choose to eschew the lower-powered LSD batteries in favor of high-capacity versions like PowerEx's 2700 mAh batteries.  The theory is that if you're using your batteries all the time, you'll have to charge them up a couple times a week anyway, so the LSD feature gains you nothing and costs you capacity.  If you shoot that frequently, that's certainly a reasonable argument.

As a part-time professional photographer, I don't shoot that much.  Although my one on-camera speedlite gets used a couple times each week, the majority of my flashes and batteries only get pulled into service once every month or two.  For me, low self discharge batteries are a must.

This time around, I chose to go with a somewhat newer battery, the PowerEx Imedion 2400 mAh LSD model.  PowerEx has a good reputation, so I wasn't worried about the quality of these Imedions.  They're LSD, so I'm not worried about them still being usable if they're unexpectedly needed after sitting my my bag for a few weeks.  They're rated for a minimum of 2400 mAh, which is mid-way between my old Duracells and the Eneloops.

How do you check the capacity of a battery?  Get yourself a good charger that will charge individual batteries separately (not just in pairs or quads) and also has the ability to refresh or recycle batteries.  If all you ever do is top off your batteries, their lifespan will slowly decrease.  They need to be fully drained & recharged now & then.  The two chargers which everybody recommends for this are the La Crosse BC-700 and the Maha PowerEx MH-C801D.  I've got the BC-700 and love it, though with the huge number of batteries I own, I wish I could refresh more than four batteries at a time.

How well do the Imedions work?  I've gotten used to popping a "fresh" set of Duracells into my Canon 430EX and then waiting a long time for it to charge up the capacitor.  The 2008 Duracells take 17 seconds to light the "ready" indicator after full-power flash.  A freshly-charged set from 2010 take 30 seconds.  Yes, it's frustrating.  When I first popped in a set of Imedions (with a completely drained capacitor from several days of non-use), it took 2.5 seconds for the ready light to illuminate.  The same 2.5 seconds was required to recharge after a manual full-power pulse.  Repeatedly.  I love these things!  Of course, the Eneloops exhibited the same timing as the Imedions, but they wouldn't be able to sustain nearly as many pops as the Imedions.

The down side (there's always a down side) is that the Imedions are usually a fair bit more expensive than the Eneloops.  You can pick up a 4-pack of standard-grade, AA or AAA Eneloops for about US$10 on Amazon.  The Imedions are usually closer to $13-14 per 4-pack.  Fortunately, Amazon is currently offering a 16-pack of AA Imedions for $42 -- just $10.50 per 4-pack.  It even comes with four 4-pack cases.  I jumped at that offer, and I'm glad I did.  That price still exists a month after I ordered mine, but I can't guarantee it'll stick around forever.

If you choose to upgrade, just be aware that you can't mix and match batteries of different types without killing both batteries.  In a perfect world, you'd keep each 4-pack together as it came out of the package.  I do that with my flashes, but it's an unrealistic goal with my household Eneloops.  As long as I keep nothing but standard-grade Eneloops in the drawer for the kids to use, I should be OK.

What's your favorite brand of AA battery, and why?  Do tell in the comments below.