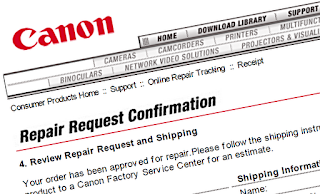 Having just received another damaged lens back from Canon Factory Service in fine shape, I wanted to give a thumbs up to the folks who work there.  This is the fifth time I've had to deal with them, and the experience has always been as pleasant as you could hope for, given the circumstances of having a broken camera.

Canon has a pretty simple method for most repairs:  there's a flat rate cost to repair any item and then ship it back to you.  The cost varies per item.  I guess they've just averaged out the most common repairs to arrive at that cost.  They do reserve the right to charge you more if your repair requires extensive new parts, but I've never seen that happen.  This flat rate system makes the process very streamlined, since you don't have to wait for a diagnosis to see how much your repair will cost.  Chances are, it'll be the rate advertised on their web site for your device.

You can schedule a repair directly off their web site and print a shipping label from there.  You enter your credit card number to be used for repairs.  Even for warranty repairs, you still have to pay to send the item to one of Canon's three repair centers.  For non-warranty issues, the flat rate covers their diagnosis, parts, labor, and return shipping.

Canon will contact you after diagnosing the problem in order to get your approval of the repair costs (just in case they're higher than expected).  If you decline, they'll reassemble the broken item and ship it back to you free of charge.  If you approve, they'll charge your credit card and return the item in about a week.

As a non-pro (now semi-pro) consumer, I've always been very happy with the turnaround time they provide.  On my most recent repair, I had the lens back in my hands just 15 calendar days after dropping it off at UPS.  From the time I called to approve the repair cost, it only took them 6 calendar days (4 working days) to get it repaired and back to my doorstep.

One thing you need to keep in mind is how you ship the part to Canon.  Don't send them any more accessories then necessary:  remove all filters, batteries, memory cards, etc.  Do send lens caps, though.  If available, pack it back in its original box with the styrofoam supports, then pack that box inside another shipping container with at least 2" of surrounding padding (bubble wrap, newspaper, etc).  Since Canon doesn't use RMA's, you'll need to ship it with a carrier that provides a tracking number, and you'll want to insure the shipment for the full replacement value of the device.

During my last return, The UPS Store informed me that any time you insure a package for more than their standard $100, they prefer that you pay them to pack & pad the package for you (at a cost of about $12 for my Canon 10-22mm lens).  If you do it yourself -- no matter how securely -- they make you sign a waiver that says UPS will only insure against loss, not against shipping damage.  That sounds like a scam to me.  I'm not sure if this is specific to just their full service stores, or to UPS as a company.  Perhaps it's different if you print your own shipping label online and then drop the box at their counter & run.  FedEx requires only that they visually inspect the inside of any package insured for over $500.  I went ahead and signed the waiver since I was confident in my packing skills, and the package was destined for the repair center for a flat-rate repair anyway. 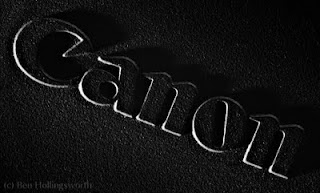 My first experience with Canon Factory Service was in late 2003.  My first point & shoot camera, a Canon Elph S110, stopped focusing.  Apparently, a bit of grit or something got jammed into the mechanism that extended the lens and rendered it unable to focus.  The camera was long out of warranty, and Canon quoted me something like $80 to fix it, which seemed like a bad idea for a 2-year-old, low-end camera.  The repair center shipped it back to me free of charge, so I only paid the $10 or so to get it to them in the first place.

I dismantled the camera, cleaned it, and tried to fix it myself.  I managed to get it working once or twice, but then it failed again in the same manner, and I couldn't resurrect it.  The experience of attempting repair on a near-worthless device was very enlightening, though, and I learned a bit about how they assemble things.  I ended up selling the carcass at a garage sale years later.  That turned out to be a bad move, as I had not yet heard of the Canon Loyalty Program.

My second service call was in 2008 for my 430EX speedlite flash, which I bought new in late 2007, shortly after buying my first DSLR.  The lens zoom feature wasn't working, either manually or in conjunction with the camera.  This is a minor issue, but I believe this was under the tail end of the factory warranty, so I wanted to get it fixed while it was still free.  I sent this in at the same time I sent my Sigma 17-70mm lens in to Sigma Service have the focus calibrated.  Both came back in good working order.

My third experience came in May 2009.  My third P&S camera, a Canon SD870IS, was still under warranty when the power switch got bumped while in my pocket, attempting to extend the lens when there wasn't room.  The lens got jammed, and I had to send it back to Canon.  They repaired the camera under warranty with no questions asked.  Even though they probably could have argued that it was my fault (turning the camera on while in my pocket), they didn't.  Perhaps they acknowledged that a vulnerable instant-on button was a design flaw.  When I got the camera back, I glued a little, rubber O-ring around the power button so that it could no longer get accidentally bumped.  Works like a charm!

The fourth time was for my Canon 70-300mm f/4-5.6 lens, which I bought as a factory refurb in 2008.  In April 2010, I had loaned it to a friend to shoot Sandhill Cranes for a weekend.  When I used it myself two months later to shoot a golf tournament, I found that the focus plane was angled -- closer at one side of the frame than at the other.  The front half of the lens also wobbled a bit.  Accidents happen, I guess.  Canon found several damaged internal components, but repaired them all at the $100 fixed rate.

My fifth and most recent experience involved my Canon 10-22mm ultrawide lens.  I had bought this lens used from a friend in May 2010.  In late January 2012, the lens had been sitting for a couple weeks atop a buffet in our living room, from where I used it now & then as needed.  One day, I noticed that it wasn't focusing properly.  Further inspection showed that the front half of the case was loose from the back half, separated at the focus ring.  Off again to Canon's repair center, where they determined there was impact damage, and again fixed the lens for $105.  I assume that the lens got knocked off the buffet onto the carpeted floor, although there were no external signs of damage and nobody in the house acknowledged having done it.  [Update: a few months later, my 7D body had to be sent in for a faulty shutter mechanism.  Coincidence?  Hmmm...]  As always, it came back in excellent shape.

It always sucks to be without a lens due to damage.  I've been fortunate to never miss an important event because of it, although the 70-300's malfunction did rob me of a number of good golf shots at a tournament I was shooting.  Overall, I'm pretty happy with the way Canon treats their customers when it comes to repair service.

If I were a full-time pro, I'd definitely be involved in the Canon Professional Services program, which provides faster service and other perks to professional Canon customers.  [Update: after the 7D shutter incident, I now am a CPS member.]

What experiences do you have with factory service centers for various manufacturers?  How does Nikon compare?  Do tell in the comments below.
Posted by Obi-Wan at 10:11 PM