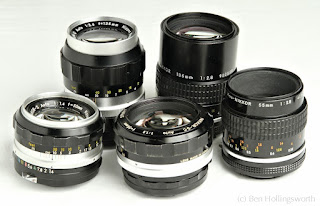 As regular readers know, I've come to enjoy using quite a variety of older, manual-focus lenses on my Canon EOS bodies.  This may seem like blasphemy, but among my favorites are some of Nikon's Nikkor lenses.  Of course, Nikon's own DSLR bodies are also able to use older Nikkor lenses... with some caveats.  Before I go into too much detail on specific Nikkor lenses for my "Old Glass" series, I wanted to lay the groundwork on the differences between these Nikon lens mounts and how those differences affect modern DSLR users.

Nikon first introduced their "F" lens mount in 1959.  The new mount was named after the Nikon F body, which was introduced at the same time and was the first to use the new bayonet mount.  While the same basic bayonet mount is still used today on their new flagship D4 body, there have been some significant modifications over the years that affect lens/body compatibility.  The three resulting versions from the manual focus era are referred to as "non-AI" (or "pre-AI"), "AI," and "AI-S."

If you shoot a Nikon body and want to use older Nikkor glass, it's critical that you understand these differences.  If you shoot some other brand of body (like my EOS), you can happily ignore these distinctions, as the only effect they have on you is the price that you pay for the lens.  Lenses that are less desirable for Nikon shooters will be considerably cheaper for us on the open market.

The initial F-mount variation, used for the first 18 or so years, is now known as the "non-AI" or "pre-AI" version.  It was created for a simpler era when cameras' exposure variables were set manually by the photographer.  The most obvious feature of AI lenses is that the little, silver aperture indexing tab has no holes in its ears.  Additionally, the back edge of the aperture ring is smooth all the way around, and the only set of aperture numbers are the large, colored ones that are forward of the indexing tab on the lens barrel.  In order to calibrate the camera to the lens' maximum aperture, after mounting the lens, you had to rotate the aperture ring wide open.  Failure to do so would leave you with incorrectly exposed images. 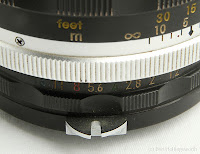 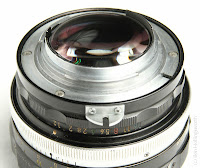 In 1977, Nikon modified the F-mount to accommodate bodies with more automatic features, and to remove the necessity of rotating the aperture ring after mounting the lens.  This new system was known as "Automatic Maximum Aperture Indexing," or "AI" for short.  Several visible changes differentiate AI from non-AI lenses.  First, the ridge along the back of the aperture ring now has a gap machined into it that interfaces with the camera to provide this automatic indexing.  Second is a set of smaller aperture numbers printed along the back edge of the aperture ring.  These are visible through the viewfinder via a window on AI-equipped bodies.  Third, and perhaps most obvious, are the two holes drilled in the indexing tab ears in order to let light shine onto the second set of aperture numbers which would otherwise be hidden behind those ears.

Nikon SLR bodies introduced early in the AI era (including the FM, FE, EL2, F3, F4, and a few others) supported the new features of AI lenses, but still allowed the non-AI lenses to mount just fine.  Nevertheless, Nikon provided a service to convert non-AI lenses to the AI design by replacing the aperture ring, thus allowing the older lenses to mount and meter properly on newer bodies.  Third parties also offered these AI conversions, and some (such as John White) still do so at a reasonable cost.  Most third party conversions merely modified the original aperture ring rather than replacing it, but that still got the job done.  Because of the minimal nature of these aftermarket conversions, it's not always obvious whether an older lens has been "AI-ed" or not.  The most important thing to check for is the gap cut into the indexing ridge along the back of the aperture ring (the leftmost arrow in the image below).  No gap means no AI.  The lack of this gap can cause physical damage if a non-AI lens is mounted on an incompatible camera body.  (More about camera compatibility below.) 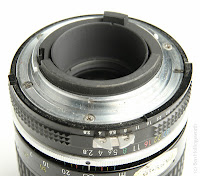 In about 1981, Nikon added another improvement to the AI lens interface and dubbed it "AI-S."  When camera bodies gained the ability to control the lens aperture automatically, they needed to know that moving the stop-down lever a certain distance would always close the lens aperture a certain amount.  AI-S lenses close the aperture by a linear amount as the lever is moved.  AI lenses made no such guarantee.  In practice, this makes no real difference to today's cameras, and it does not affect the compatibility of lenses to various cameras.  It does affect the cost of used lenses somewhat, as more modern versions tend to fetch a higher price.

Two features distinguish AI-S lenses from AI lenses.  Most obviously, the number of the smallest aperture on the ring is printed in orange for AI-S lenses, vs blue or white for earlier lenses.  More importantly, on the rear face of the lens mount, just clockwise from the lens locking notch, a small groove has been cut into the mounting surface.  It is this groove which communicates the AI-S feature to the camera body.

Again, these mount differences have no effect on people shooting with non-Nikon bodies.  Using an appropriate adapter, we can use non-AI and AI Nikkor lenses with equal aplomb -- meaning that we have to use stop-down metering just as we would with any other off-brand lens, and the camera's built-in light meter will function with some degree of accuracy.  We can find some real bargains on non-AI lenses that contain great optics, but aren't compatible with Nikon bodies.

It's a different story for those shooting Nikon bodies, though.  A matching body will meter properly and even automatically stop down a compatible lens.  However, not all lenses are compatible, and attempting to mount an incompatible lens on the wrong body can cause physical damage to the body.  An exhaustive compatibility matrix is beyond the scope of this article, but you can find most of that info on John White's site.

In general, AI and AI-S lenses will mount safely on all newer Nikon DSLR's.  Most bodies will even meter correctly with these lenses.  The very lowest-end bodies like the D40 will not meter correctly, requiring you to set your exposure manually.  The up side of these low end bodies is that they can safely mount the old non-AI lenses with the same functionality as newer lenses.  Nicer Nikon DSLR's, on the other hand, risk physical damage to the body if a non-AI lens is mounted.  I believe this is due to the lack of an indexing cut-out in the aperture ring.  These non-AI lenses can be converted to AI for a reasonable cost (about US$35 + S&H) if you're really attached to your vintage glass.

So that's the basic run down on the different Nikkor lens mount versions.  The good news is that Nikon made many of their lenses in all three versions, so if you catch wind of a good lens with a bad mount, chances are you can find it with a mount that suits you better.

One other feature of Nikon lenses that may be of interest if you play the field a lot:  Nikon lenses rotate opposite most other brands both when mounting on the camera.  It's not a big deal, but I still try to twist the wrong direction even after years of using Nikkor glass.  Different manufacturers spin their focusing rings and aperture rings all different directions, but the bayonet mounting rotation is one feature that's consistent across all other brands of lenses.

The most exhaustive list of Nikon lenses that I've found is at the PhotoSynthesis site.  There, you'll find exhaustive lists of lens specs, serial numbers, and manufacturing dates.  This site is invaluable if you've found an older lens and you're trying to nail down the date of manufacture.  I wish we had that kind of data available for all the popular lens manufacturers!

For the record, the lenses pictured in this post are (oldest to youngest):

Hopefully, this gives enough background on the various flavors of Nikkor lenses.  I've got a handful of these babies in my bag, and I'll be detailing specifics of them in upcoming "Old Glass" articles.  For a primer on manual focus lenses, check out this introduction.  If you've got any questions, or if any of the above is blatantly wrong, or if I've omitted anything really critical, please speak up in the comments below.