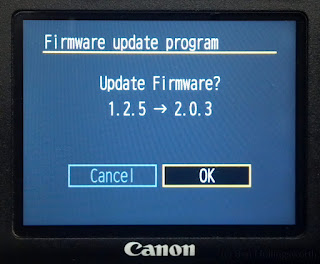 In late August 2012, Canon released a new major version of the firmware for its 7D body, upgrading it from 1.2.5 to 2.0.0.  This was followed a few weeks later with version 2.0.3, which fixed a few minor bugs.  The v2 firmware added a number of relatively major features to the 7D, and provided an uncommonly significant upgrade to a body that is over two years old.  After waiting a month for other people to beta test the new firmware (a good idea, as evidenced by the release of v2.0.3), I finally upgraded my own 7D from version 1.2.5.

I've upgraded firmware versions on my Canon bodies several times in the past, although I don't stay on top of every minor update that's released.  The process is pretty straightforward:


That's it.  Pretty painless.  I did see one minor problem right off the bat after my upgrade:

I had my custom menu filled with options, the last of which was the "Date/Time" option.  After the upgrade, that last line on "My Menu" was replaced with a blank line.  When I tried to re-add "Date/Time," the camera said that My Menu was full and that I should delete another item first.  When I did, I found two copies of "Erase Images" (which had been the item right before "Date/Time" on My Menu).  I deleted the second of these, which then allowed room to re-add "Date/Time" to My Menu.

The following improvements were added in v2.0.0, per Canon.  You can learn more about them from a video on Canon's web site.


The features I'm most looking forward to are the max burst buffer and the ability to set custom filename text.  The first one is obvious for a sports photographer.  The second one will be nice because I shoot with multiple cameras at an event, and sometimes the image numbers overlap, which creates conflicts when I download the images into the same folder on my computer.  We'll see how it goes after I've used it for a while.

Have you ever updated the firmware on your camera?  Did you notice a difference, either for better or worse?  Tell us about it in the comments below.