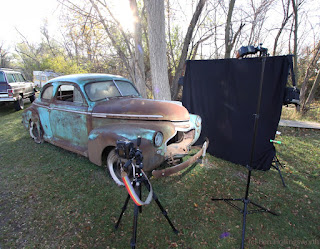 In my previous post, I presented a number of photos that I've taken over the years of my uncle's first car, a 1941 Chevy Master Deluxe Business Coupe.  The last of those images were taken on my final day with this rusty, old antique.  While most of the earlier photos were taken in natural light, these were artificially lit and composed against a black background, giving a decidedly "portrait" feel to the images.  Today, I want to go into some detail on how these photos were created.

I awoke Saturday morning and lay in bed with lots of thoughts running through my head.  Some of them revolved around the Chevy, which I expected would be hauled away from the farm any day (or hour) in the near future.  I didn't want to regret missing some great photo op with that beloved, blue patina.  While I lay there just before sunrise on a cloudy morning, I started envisioning smaller portions of the car beautifully lit and contrasted against a plain, black background.  I started fleshing out the details as I awoke, and decided it was worth a shot.  I'd need to overpower the sunlight, which meant I needed to hustle out there before it got too bright. 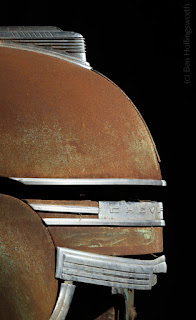 I finally rolled into the farm around 8:30am.  It was well after sunrise, but it was a cloudy morning, and the car was shaded by (largely leafless) trees to the south and east.  The morning started out perfectly still, which is always a good thing when using backdrops and light stands outdoors.

The hardest part of these photos, and something which I hadn't anticipated while lying in bed, was that many of the great profiles that I wanted to depict were obscured by other parts of the car when viewed from my desired angle.  That made life a little more difficult than I'd hoped, and caused me to leave with only a small handful of good photos after 90 minutes of shooting.

To make the black background, I setup my backdrop stands and hung a black bed sheet from the cross bar, clamping it to the stands at the bottom corners to keep it tight.  Even with my two camera bags hanging from the uprights as ballast, this setup makes a lovely sail, as I found later when the slightest hint of a breeze toppled it over onto the car.

I positioned the backdrop as far back from the car as I could for two reasons.  First, I wanted to keep it out of my light without having to flag it.  Second, if it did catch some light, I wanted as little detail as possible in the backdrop, even at the small apertures I was using. 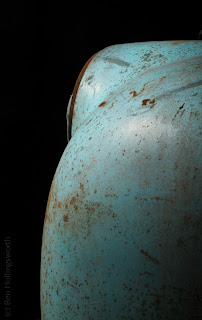 Because I had to work fast against the increasing daylight, I used only a single, bare Canon 580EX Speedlite on a stand off to one side.  I triggered the speedlight with my Cactus V4 radio trigger.  A 1/4-CTO gel was added to warm up the light slightly.  In order to keep the light as even as possible with minimal drop off from one side of the frame to the other, I positioned the light as far away from the car as possible and typically ran it at half or full power.  This is necessary thanks to the Inverse Square Law.

To maximize the light power and keep the light from spilling onto the backdrop, I zoomed the flash head to around 80-105mm (as tight as I could manage for each composition).  I experimented with using a snoot, but found it to create too narrow a beam for most photos.  It also turned out to be unnecessary for keeping the background black.  FYI, my preferred snoot is made from a black, foam soda can "koozie" with the bottom cut off.

As I often do when shooting old objects, I made these photos through an old, manual lens:  my lovely Micro-Nikkor 55mm f/2.8 AIS macro lens.  In order to nail the focus and framing, I put the camera on a tripod so I could tweak each setting separately.  LiveView at 10x works great for perfecting focus in these situations.

In order to minimized the effects of the increasing sunlight, I set my camera to ISO 100, the max sync speed (1/250s), and the smallest aperture I could manage with my flash power.  I generally used f/16 or f/22 to get the necessary depth of field.  This killed most of the ambient light so that each scene was lit using only my strobe.  It helped that I was shooting from the shady side of the car most of the time, so there was even less sunlight spilling onto the surfaces I cared about.


The tripod allowed me to keep my composition unchanged while I monkeyed around with the light position.  This is another area that was unexpectedly time consuming.  The chrome trim on that 71-year-old car isn't very shiny, but it was enough so to cause glare from a flash.  Additionally, the rounded body panels meant those which weren't directly facing the flash would be much darker than those directly facing the flash.  To get even lighting on the rusted surfaces and avoid glare from the trim, I typically positioned the flash as high as I could reach (7-8 feet up) and angled it downward.  The stand was usually about 70 degrees to one side from the camera.  On a couple shots, I broke out my white handkerchief to use as a reflector to bounce just a little more light down onto the shaded areas.  A gridded strip box may have made the lighting more even, but it would have been unwieldy in the breeze, and it would have removed the hard light that showed off the texture of the rusted surfaces.

These pull-back setup shots give a good idea of how everything was setup for a couple of the shots.  The rising sun was in the direction of the car's left ear fender.


Eventually, the breeze started to pick up, toppling my background sheet onto the car.  The sun was climbing in the sky and getting brighter, so I decided it was time to call it quits for the day and bid the Chevy farewell.  There were more angles of different parts that I had hoped to get, but it wasn't in the cards this time.

If you like this style of photo, check out the similar shots I did of some cockatiels earlier this year.  Got any questions on this?  Any suggestions on how I could have improved these?  Any photos of your own in this style that you'd like to share with everyone?  Please speak up in the comments below.
Posted by Obi-Wan at 8:00 PM