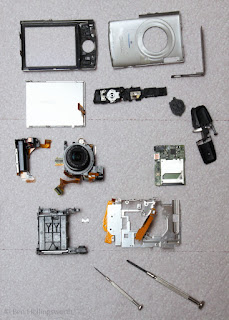 I've had several Canon point & shoot cameras since we first made the digital leap in late 2001.  Because these tiny cameras were made to be carried around everywhere in your pocket, then tend to have a hard life in our family.  They inevitably end up with some physical defect that prompts me to completely tear them apart in an attempt to fix the problem.  Sometimes I'm successful, other times not.  The process has been very similar every time for 11 years, and I expect that it won't change a whole lot going forward, so I wanted to document it here for you.

The photos here are of the SD870IS.  Its final blow (literally) came when I dropped it from head hight onto a hardwood gym floor while it was turned on with the lens extended.  The lens assembly got bent to one side, creating a fixed-focus tilt-shift lens. 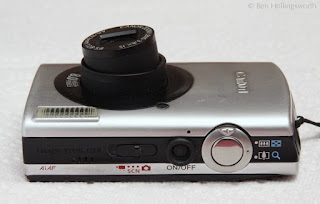 There are lots of screws which must be removed through this process, and they are of many different sizes.  If you just throw them into a pile as you remove them, you'll never get the camera back together again.  I solve this problem by drawing a rough sketch of each face of the camera and then taping each screw into the appropriate spot on the sketch. 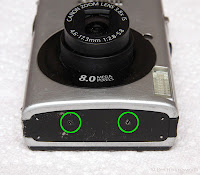 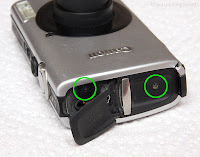 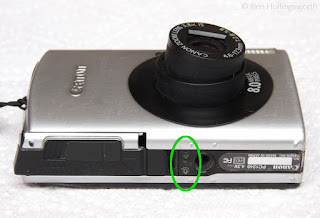 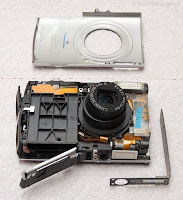 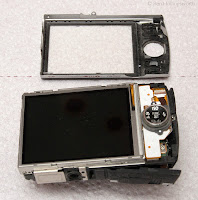 The LCD screen is held in place by a thin, metal trim piece, which in turn is held on by two screws.  One is under the bottom left corner, and the other is above the top center edge. 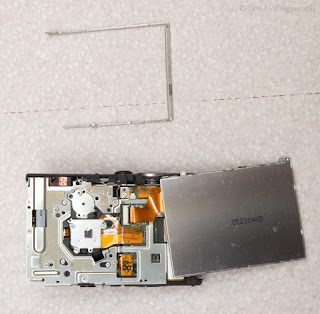 Once the trim piece is free, the LCD can be folded over to the right to expose the two ribbon cables that connect it to the motherboard.  These ribbon cables can both be released from the circuit board by first using a tiny screwdriver to flip the black plastic bars upward and then gently sliding the cable out of the connector. 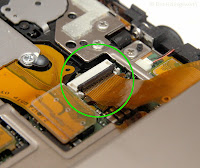 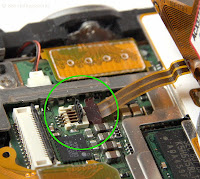 With the LCD out of the way, disconnect the power lead running from the top plate to the circuit board.  The connector just pulls straight upward with no flip locks.  Use a tiny screwdriver to push the plug upward.  Do not pull on the wires themselves!  Then remove one screw on the back side of the camera (facing upward) and another on the front side to release the top plate. 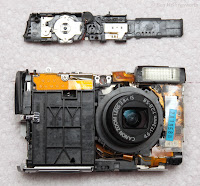 To remove the flash assembly, unplug the ribbon connector from the top of the camera.  It just pulls straight upward away from the surface to which it's connected.  Then unscrew one screw at the left edge of the back panel.  The flash obstructs the lens assembly, so you need to remove the flash first. 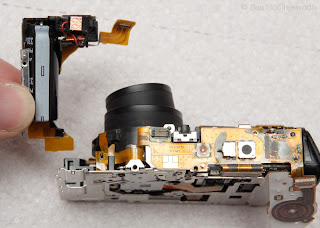 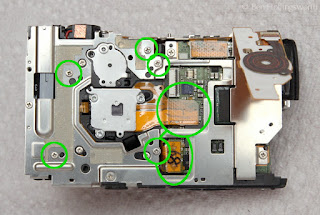 If your goal is to replace the lens assembly, you can stop here and reverse the steps to reassemble the camera with the new lens.  For the sake of documentation, I continued dismantling the right side of the camera as well. 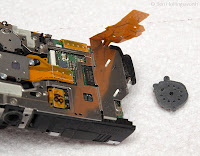 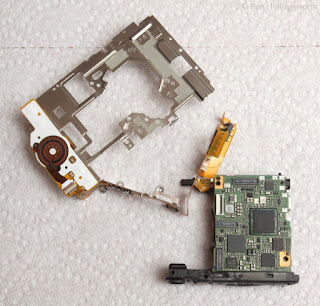 The circuit board will now freely lift off the plastic battery compartment. 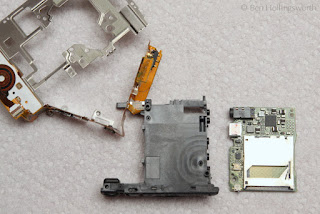 To disconnect the flexible circuit ribbon from the top of the battery compartment, find the clip that holds the LED in place, gently pry the front tabs off the pegs that hold them in place, and slide it upward.

And that, my friends, is pretty much as far as you can disassemble most Canon point-and-shoot cameras.

As you can see by looking closely at the lens assembly, the ribbon cables that completely surround it are not designed to be disconnected and reconnected.  Disconnecting them to further disassemble the assembly is a permanent operation.  If you want to replace the assembly, eBay and Google are sure to give you some sources for new replacements. 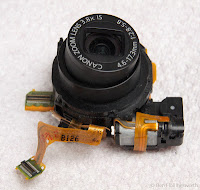 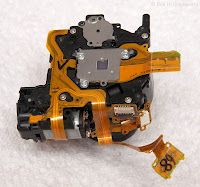 To reassemble the camera, just work backward through these same steps.

If you're interested in more DIY camera repair, click on the DIY topic to see all Prairie Rim Images blog posts with that tag.  Have you ever disassembled a camera or other equipment to fix it yourself?  How did it turn out?  Share your war stories in the comments below.
Posted by Obi-Wan at 8:00 PM