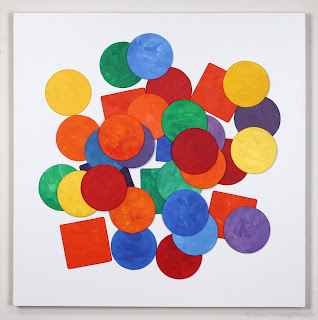 My dad is a pretty good artist.  His current medium of choice is acrylic-painted 3D wall art, and he's been amassing a healthy portfolio of work in preparation for a gallery show.  He had been taking photos of the pieces to display on his web site, HollingsworthArt.com, but his point & shoot camera was giving him lackluster results, so I volunteered to come photograph all of his recent work before he hauled it to the gallery for the show.  Photographing--or more specifically, lighting--large, semi-gloss objects of varying sizes can present some challenges, so I figured I'd share the process I used.

Many of the pieces were roughly 48" (122cm) along at least one dimension, and the narrowest of them was less than 12" (30cm).  There were a mix of horizontal, vertical, and square orientations.  The photo studio would take the form of my parents' basement TV room, which has a large, empty, dirty-white wall on which the art would be hung when photographed.  One side of that wall opened up to a huge room, but the other side allowed just a few feet of space before hitting the TV.  The ceiling was bare, exposed, wooden floor joists which reflected zero light.

The camera sat on a tripod about 12-15 feet (4m) back from the wall.  I used my beloved Nikon Micro-Nikkor 55mm f/2.8 AIS lens on my Canon 7D (1.6x crop sensor) body.  That Micro-Nikkor has a reputation for a very flat focal plane, which makes it great for this sort of work.  It's also so sharp at middle apertures that you could cut yourself just by looking at it.

With this setup, I could have just used a long exposure with the ambient room light, which is what my dad had been doing with his P&S camera.  The problem with this is that the room light wasn't as even as you might like, and that it was colored by an ugly mix of random CFL bulbs.  Positioning a reflector (like the full-width windshield sun shade that I use) below the art could have evened out the light somewhat.  By taking a test shot with a grey card, I could have compensated for the color cast in post.  However, the results probably still wouldn't have been ideal.

Since I've got lighting gear coming out the wazzoo, I felt it was much easier to kill off the ambient and create my own light.  I set the camera at ISO 200, 1/180s, and f/8 to optimize sharpness, noise, and recycle time (keeping in mind that these images were destined for a web site).  Without the lights, this left the frame completely black, which is exactly what I wanted.

I then set up two light stands, one on each side of the display space.  On each stand sat one of my Alien Bee B800 studio lights.  The light at camera right wore a Fotodiox 48" octobox.  Unfortunately, there wasn't room for my other big octo at camera left, so that flash bounced into a 32" white umbrella which had to be pressed up against the entertainment center in order to give me a decent working distance and even spread of light.  One of the B800's was triggered with my Cactus V4 radio trigger, and the other used its built-in optical slave.  Both lights were set to about 1/4 to 1/2 power.

All of the above is really pretty trivial.  The tricky part is positioning the lights such that they get uniform lighting across the subject without reflecting off the semi-gloss wooden surface.  Normally, I'd also be worried about limiting cross shadows, but since this is 3D art, Dad actually wanted to highlight the relief, so shadows were a Good Thing(tm).

I started out with the lights about 30 degrees to each side of the camera and about 8-10 feet from the art work (as seen above).  That produced wonderfully even light, except that it created noticeable highlights against the dark, painted wood.


I then moved the lights forward to about 60 degrees from the camera (30 degrees off the back wall) and about 6 feet from the subject.  This pretty well eliminated any reflections, but it did seem to light the edges of the art just a bit brighter than the middle.  It also produced noticeable shadows in a couple of the pieces that had lots of relief.  Dad liked this, but if I were shooting a flat print in a sculpted frame, these shadows would be undesirable.  As with any subject, using large modifiers definitely helps reduce shadows.

The distance from the work also comes into play.  The farther back the lights are from the subject, the smaller the difference in light intensity between the nearest and farthest portion of the subject.  That makes the lighting more uniform, which is ideal for this style of product documentary photography.  You need to balance this against the size of the light modifiers, which appear smaller as you back farther away.

Another issue to consider is keeping the light even from top to bottom, especially for a tall, narrow piece.  I mounted my lights at about the same level as the middle of the art.  With that setup, I could see a noticeable drop-off in light toward the top and bottom of the subject.  I counteracted this somewhat by putting the aforementioned reflector flat on a bench below the subject.  A better solution would be to raise one light closer to the top of the piece and lower the other light closer to the bottom.  You could even employ this technique with wider subjects, but you may want to angle both lights to point toward the center of the piece.

In order to minimize the amount of postprocessing necessary, it's important to get both the exposure and color as perfect as possible in-camera.  When representing a product, you want the images to match the original subjects as closely as possible.

The ideal thing would be to take a test shot of an 18% grey card once you get the light position set properly.  Fill the frame with the gray card and check the histogram.  The histogram of an 18% card should show a big peak right at the middle of the range, regardless of how the image looks on your LCD.  Adjust the flash power or camera exposure until you get here, and you'll be happy.

To get the light color right, you can get really close simply by forcing your camera to daylight white balance.  If you want to get it perfect, use that image of your grey card to (A) set a custom white balance in your camera or (B) adjust the white balance later in post.  The important thing is that every image be taken with the same settings so that you don't have to adjust each image individually.

By the time I got back to the computer, all that was left was to tweak the rotation or perspective and then crop. 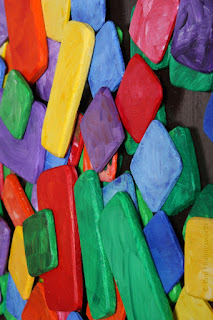 One large footnote:  Because this was high-relief, 3D art, I also took a number of detail photos to show off the texture of each piece.  The camera shooting the pull-back shots stayed on the tripod, but I also used a second camera with a macro lens to make hand-held shots from different angles.  These were taken at smaller apertures (f/16) for a deeper depth of field than the others, so I used a higher ISO in order to keep the flash power unchanged when switching back & forth.  For images destined for the web, ISO 800 is perfectly acceptable.  However, in retrospect, I wish I had increased the flash power and lowered the ISO on both cameras, just because I could.

These same techniques work for photocopying (literally) flat work, too.  I don't even use a scanner any more for anything bigger than a postage stamp because it's just as easy for me to pull out my camera.

What's been your experience with copying things using your camera?  Are there any issues that have given you fits?  Please speak up in the comments below.
Posted by Obi-Wan at 4:50 PM