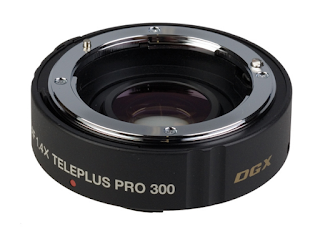 Ever since I upgraded my Canon 70-300/4-5.6IS lens to the shorter, but faster, 70-200/2.8IS, I've missed the extra reach that the 300mm lens had.  A teleconverter has been on my wish list ever since.  With the Sandhill Crane and Bald Eagle photographing season approaching, I decided it was time to bite the bullet.  Despite the impending birding outings, a 1.4x teleconverter seemed to be a more useful multiplier than 2x, so I bought a Kenko 1.4x PRO 300 from Amazon.  I took a few test shots immediately after unboxing it, and wanted to share what I found.

Before I get to the results, I should explain why I bought the Kenko brand teleconverter instead of the other options:

First, it was cheaper than the Canon model.  I don't take pictures for a living, so any place I can save a few bucks on equipment is welcome.

Second, reviewers claimed its image quality nearly equaled the Canon and was at least as good as any other third party offering.  The Tamron SP line is reportedly nearly its equal.  I read a few more complaints about the Sigma teleconverters.  Kenko is owned by THK Photo Products, the same parent company that owns Tokina and Hoya, so they know how to make good quality glass.

Third, it was compatible with any EOS-mount lens.  The Canon TC's have a protrusion out the front of the converter which prevents it from being mounted to any but their professional grade telephoto lenses.  Even Canon's own consumer grade telephotos are out of luck with the Canon TC.  I'm told that the Sigma teleconverters work great with Sigma lenses, but not so much with other brands (even Canon lenses).  The Kenko & Tamron, by comparison, are compatible with pretty much any lens with an EF or EF-S mount.  Since I use one Canon, one Sigma, and a boat load of off-brand (mostly old, manual-focus) telephoto lenses, cross compatibility was important to me.

Finally, it was rumored that the Kenko model had the interesting feature of not passing the updated aperture number back to the camera.  A 1.4x TC effectively shrinks the aperture of a lens by one stop.  A 2x TC shrinks it by two stops.  Most electronic teleconverters will automatically make this conversion when the lens data is passed to the camera body, so the camera knows what the actual aperture really is.  This is important when using autofocus lenses, because Canon bodies (except the 1D series) can only focus at f/5.6 and wider.  With any narrower aperture, the camera won't even attempt to focus, regardless of how much light exists.  However, if the camera thinks that it's got an f/5.6 lens (not knowing about the teleconverter), it'll give AF the old, school try.  In my experience, this TC does modify the aperture as recorded in the EXIF data, but nevertheless, the camera still tried to focus even with an f/5.6 lens (converted to f/8).  That's exactly what I want.

Why did I buy a 1.4x multiplier instead of a 2x?  I had borrowed both lengths (Canon brand) from a friend to shoot a dark event recently.  The 1.4x pushed my 70-200/2.8 lens to an effective 98-280/4 lens.  The 2x pushed it to an effective 140-400/5.6 lens.  While the extra reach sometimes came in handy, the 140mm wide end was usually too long, especially when paired with my 17-70mm normal zoom lens.  More important, though, was the focusing speed.  The more light you've got, the faster and more accurately your camera will autofocus.  My 7D did a respectable job of focusing at f/4, but in a dark room, focusing at f/5.6 was noticeably slower than I would have liked.  Since my subjects were rather active, I needed faster AF.  I quickly ditched the 2x in favor of the 1.4x, figuring that I could always crop down if I wanted a tighter shot than the 280mm reach could give me.

When the converter arrived, I found that Amazon had done an exemplary job of packing the expensive glass next to (not surrounded by) plenty of padding.  Way to go, Amazon.  No harm seems to have been done, fortunately.


I immediately grabbed my Canon 7D, the Kenko TC, and three lenses to take some test shots.  In each photo, I focused on & centered the image around my neighbor's lawn chairs.  Images were all shot at ISO 200, wide open, in aperture priority mode.  The 100% crops below have zero post-processing, except for the obvious labels.


With my Canon 70-200mm f/2.8 IS lens, the image appeared just as sharp with or without the TC.  At least, it was in the center.  There weren't any in-focus objects at the edges of the frame, so I couldn't really test that.  There was not any vignetting or chromatic aberration, even at the edges.


One thing I did find odd was that the camera's aperture priority mode overexposed the converter-equipped images by one stop.  In order to get the proper exposure with the TC, I had to set the exposure compensation to -1. I almost always shoot in full manual exposure mode, so this won't be an issue for me.  Looking at the EXIF data, the TC actually appears to have cost 1.5 stops (1/3000s to 1/1000s) rather than 1 stop between visually equivalent exposures, which is curious.  That deserves further investigation.

Next, I pulled out my old Canon 70-300mm f/4-5.6 IS lens, which I haven't managed to sell yet.  This time, the image with the TC may have been just a touch sharper, but since the 70-300 isn't the sharpest lens in the world to begin with, it's hard to say for sure.  It was a really close call.  As with the 70-200, I again had to underexpose by one stop to get the proper exposure in aperture priority.  This time, it really did lose one stop, not 1.5.


The most notable thing about this lens is that its aperture is already f/5.6 at 300mm.  Adding the 1.4x TC shrinks it to f/8, which is too small for my 7D to autofocus, even on a high contrast scene with good light.  I was able to achieve autofocus out to 225mm (315mm with the 1.4x multiplier), which was right on the edge of the effective f/6.7 - f/8 range (I have my camera set to expose in half-stop increments).  Any farther out, and the AF would just hunt all over without ever locking on.

Finally, I dug out my Sigma 17-70mm f/2.8-4 lens.  Kenko, like most lens manufacturers, recommends using the TC only on lenses of 100mm or more.  The two previous lenses worked beautifully at 70mm, but I was curious how a typical walk-around lens would react.

At 70mm, everything looked fine with the TC, just as it did with the other two lenses.  At 35mm (48mm with the 1.4x multiplier) and at 17mm (24mm), the image was noticeably softer with the TC, as if somebody had lightly breathed on the front of the lens right before the shot.  You can't see it at web-sized resolutions, but it's obvious when zoomed in to 100%.  Curiously, it didn't seem any worse at 17mm than it was at 35mm, but both were noticeably worse than at 70mm.


As with the 70-200, it seems as though the TC is again costing me more than just one stop of light.  However, I did not have to adjust the exposure compensation to get things looking right.  The camera slowed the shutter speed from 1/1500s to 1/500s (1.5 stops) all by itself, just as it should have.  The lesson to be learned here is that automatic exposure correction with this teleconverter seems to be dependent on the manufacturer of the lens you're using.  If you like to shoot in the automatic modes, you'll want to keep this in mind.

Am I happy with my purchase?  Yes.  I haven't taken any real world shots with it yet, but the test shots look promising.  At 70mm and longer, the sharpness is indistinguishable from the naked lens, and the additional reach is very welcome.  I'm a little surprised that the exposure loses 1.5 stops instead of the advertised 1 stop, so I may have to do a side-by-side comparison with a Canon TC and a grey card to find out exactly what's going on.  I was hoping that the TC would still allow the 300/5.6 lens to focus automatically, but that was really an unrealistic wish.

Do you own a teleconverter?  What brand?  What's been your experience with it?  Please share in the comments below!
Posted by Obi-Wan at 8:00 PM