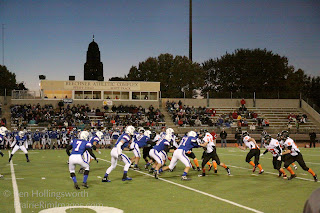 As you read last month, I've started photographing high school football for the first time this season.  The Lincoln Christian Crusaders are having perhaps their best season ever, and that happily coincided with my own piqued interest in shooting sports.  My inaugural outing went OK.  I learned a lot, and wanted to correct some mistakes at my next outing.  The next home game was the final regular season game, which is traditionally when the team's seniors are honored.  This also happened to be head coach Matt Farup's 100th game coaching the Crusaders.  LCS won the game, finishing the regular season at 7-1 and earning a #2 seed in the playoffs.  In short, it was a special occasion for several reasons. 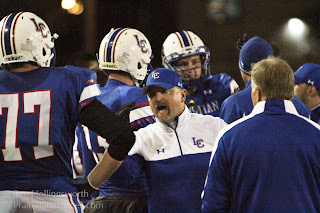 Because this was a special night for the head coach, I spent more time with my camera focused on him than I might have otherwise.  I tried to get a well-rounded view of his time on the field, starting with rallying his troops during warmups, to praying before the game, to the national anthem, to yelling on the field, to celebrating with his wife & seniors after the win.  All in all, I think I covered that as well as I could with the equipment I had available.  My fast lenses aren't long enough to get close-up shots of the bench area from across the field, so my game-time photos were limited to rear & profile views from just down the sideline.  I'm going to try to find a longer lens for the next game, so we'll see if that helps my sideline photography any.

As I mentioned, this was also Senior Night.  Prior to the game, the seniors lined up with their parents and were congratulated one by one by the coach as the fans cheered.  I was kneeling down at a distance with my 200mm lens so as not to distract anyone.  One of the seniors is the son of a photographer friend of mine.  His mom must have trained him well, because of the 10 guys in the lineup, he was the only one who stared straight into my camera and smiled at me as he was hugging the coach.

Because LCS is a smaller, parochial school, they don't have their own proper football stadium, and instead play their home games on a variety of other local fields.  The previous game had been played on the field of a local minor college, and the lighting was not wonderful. You can read that game's recap for details.  This game was played at the Lincoln High School field, and the lighting was even worse.  The field has four stadium lights per side (from goal line to goal line), so the end zones weren't quite as dark as they were last time.  However, the overall light level was still nearly a full stop darker than before. 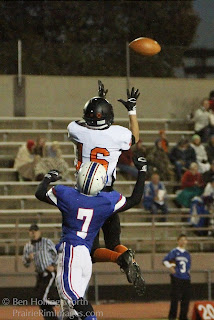 Using my Canon 7D and 70-200/2.8 lens, I shot the action at ISO 12800, 1/500s, f/2.8 or f/4 all night.  12800 is the 7D's highest ISO.  1/500s is the slowest shutter speed I'll use when people are moving, although I did drop to 1/250s for off-field shots.  My 1.4x teleconverter turns my 70-200/2.8 lens into a 98-280/4 lens.  I initially felt like I needed the extra reach when the action was out in the middle of the field, but f/4 made the photos much darker than I wanted.  By the second half, I'd given up on the teleconverter for the most part so that I could shoot at f/2.8, and I just prayed that the action would run my direction.  These were the same camera settings I used at my previous game on the brighter college field, so I found myself applying a pretty hefty curves adjustment to them during postprocessing.  This, in turn, amplified the high-ISO noise, so the shots are generally less detailed than those from the previous game.

I think I've found a way to borrow a 300/2.8 lens for the next game, and I'm eager to see how that works out, either with or without the teleconverter.  The next game will be at yet another local field, and I have no idea how its lighting compares with the last two locations.

I learned a lot at the previous game.  How did those lessons work out?

I nixed aperture priority in favor of full-time manual exposure, despite the not-quite-consistent lighting across the field.  I still believe that's the right way to go for night games, even though I still have to run a different curves correction for every image.  Knowing when to lose the teleconverter & shoot at f/2.8 helps. 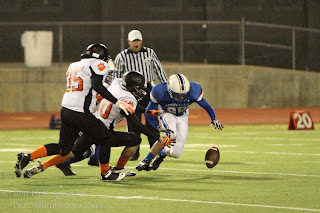 I stood farther back from the sideline this time.  That, combined with ditching the TC more frequently, allowed me to shoot almost all the action with my 70-200 lens.  That's a lot easier than trying to remember to drop the 70-200 and whip out the 17-70 as a player's running toward you.  In fact, I think I used the 17-70 lens almost exclusively for environmental shots this time.  My 10-22mm lens never even made it out of the bag.

I spent more time on my knees when shooting.  I like the perspective that gives me, and I felt like I was less weary by the end of the game.  Good, gel knee pads are worth their weight in gold.

I spent more time located farther from the line of scrimmage, and consequently got fewer shots of the backs of people running away from me.  I also spent more time in the end zone, often relocating there when the team got inside the 30-40 yard line.  I tried to position myself so that the LCS players were facing me, whether on offense or defense.  The more distant vantage point allowed me to capture action happening on the far sideline.

So what more did I learn this time?

The later we get into the season, the colder it gets.  The temperature was in the low 40's (F) at kickoff, and had dropped below freezing before we headed home.  My metal lens barrel got downright cold.  I did OK, but my fingers did get a little chilly, so I should bring some light, tight-fitting gloves next time.  I had to slowly acclimate my camera to the warmer environment when I got home to avoid condensation.

Remember what I said about dropping to a slower shutter speed when shooting people off the field?  Sometimes, I forgot to switch back to 1/500s for on-field action, so one of the best plays of the game yielded some pretty blurry shots for me.  Gotta pay closer attention to that.

Speaking of off-field shots, when I know that I'm not going to be switching back to action shots (requiring a 1/500s shutter speed) at any second, I need to reduce my ISO & shutter speed so that I can get cleaner images.  This is especially important for wider angle, environmental shots that include lots of sky, because a smooth sky at twilight shows all kinds of noise at ISO 12800. 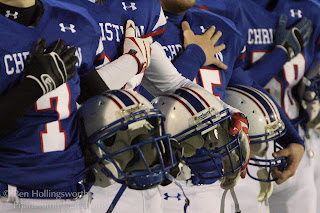 And speaking of environmental shots, all those stadium lights cause ungodly amounts of lens flare when shooting at wide angles. I need to lose the UV filter from my 17-70mm lens and just rely on the hood to protect the glass.

Finally, I need to spend more time highlighting individual players -- especially those that aren't all-stars.  I've printed & labeled a photo of all the senior players, and I'll try to get a good selection of photos of each of them at the next game.  I'm not sure how much playing time some of them get during close games, so that could be an issue as we progress farther into the playoffs.

Well, that's where I currently stand on my path to becoming a decent sports photographer.  There's still lots to learn, but I feel like I'm already leaps & bounds beyond where I was a month ago.  If you want to see the entire collection of photos from this game, check out the Prairie Rim Images gallery.  If you've got any comments or questions, please speak up below!
Posted by Obi-Wan at 8:00 PM