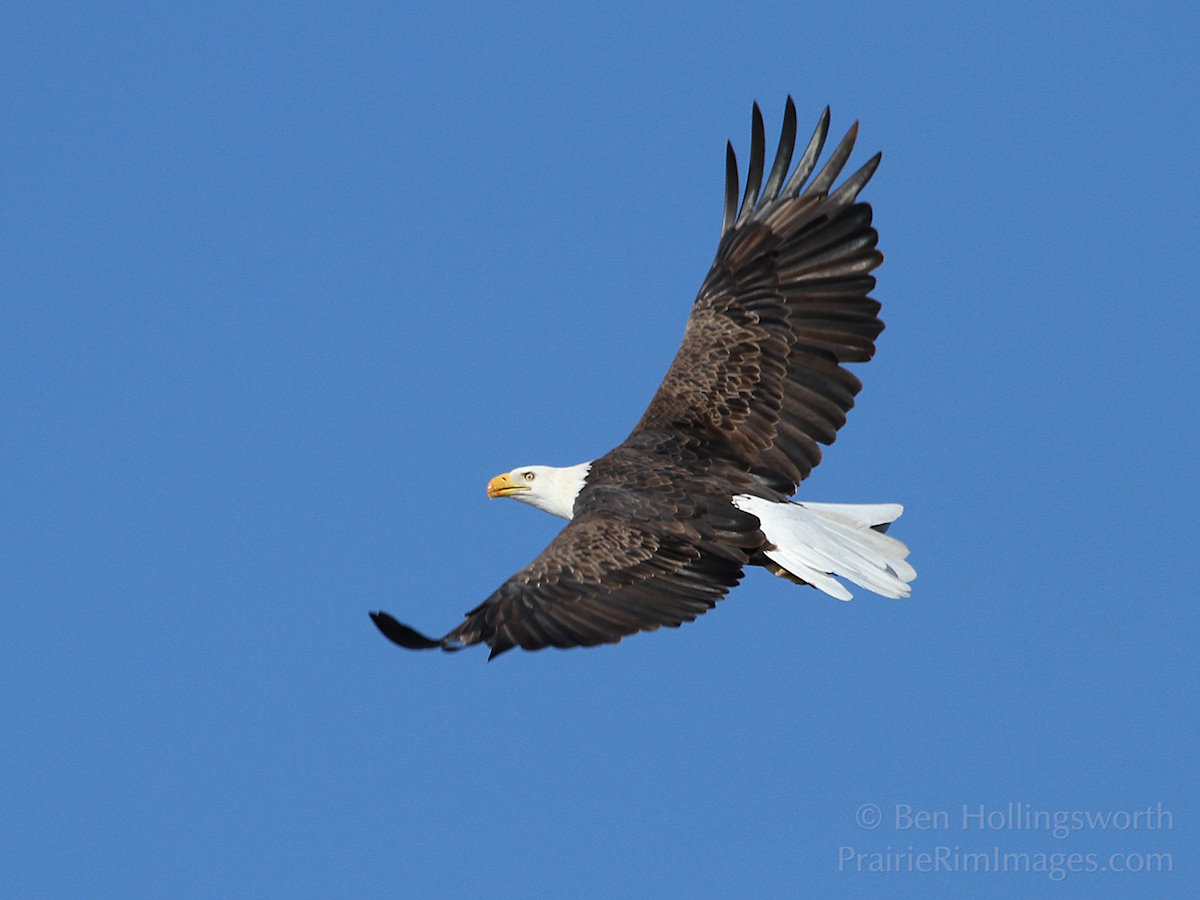 When planning a trip like this, the first thing you should do is to check the Corps' eagle watching web site.  It houses lots of good info, but the best part is the weekly eagle counts that they publish each Wednesday for dams 11 through 22, all of which lie along the Illinois border with Iowa and Missouri.

Eagle watching is a popular enough pastime at these locks that the Corps has installed observation platforms at each lock.  These platforms generally provide the best access for viewing, because they get you up above the lock so that you can see the open water below the dam.  The one exception is lock & dam 14 at Pleasant Valley, IA (just north of I-80 and Davenport).  Here, there's a much longer viewing deck right at the western river bank in a location that doesn't have to look over top of the lock.  Number 14 provides the best access for shooting eagles, assuming there are any eagles there to be photographed.  If you want to get a shot of an eagle plucking a fish from the water, #14 is where to go.  However, because it's one of the more urban dams, the numbers are generally lower there than at other dams.

December had been colder than normal in the Midwest, so the eagle counts at most of the dams were higher than normal.  When a short warm spell fell on a weekend in mid-January, we decided it was time to make the trip.  We drove out Sunday morning, visited the eagle expo being held at the convention center in Rock Island, IL (across from Davenport), and shot Sunday afternoon at dams 14 and 13 (Pleasant Valley, IA, and Fulton, IL, respectively).  We spent the night down in Monmouth, IL, and then shot all morning at dam 18 (Burlington, IA) before driving home Monday afternoon.

It was a fun trip with my daughter, but it was a lot of driving for not very much shooting.  I think it would have been better if we'd had more eagles at dam 14.  Next time, we'll allow time for a few side trips, such as the frozen waterfalls of Starved Rock State Park or the American Gothic house.

When choosing your gear, remember that the Mississippi River can be half a mile wide below the dams, and the eagles might be on the far side of it.  You're definitely going to need a long lens to get any decent shots.

I own a couple old, manual-focus 400mm lenses that aren't great at wide open aperture.  I also own a new Canon 70-200mm f/2.8 lens that's wonderful, but short.  To add a bit more reach, I've got a Kenko 1.4x teleconverter that will fit on any of those.  I've learned from our Sandhill Crane photography trips that trying to shoot birds in flight with manual-focus lenses is an exercise in frustration.  If you do get a shot, it's generally by dumb luck.

My 70-200mm (or 280mm with the teleconverter) lens certainly wasn't long enough to reach across the river, so I rented a Canon 100-400mm f/5.6 L lens for the trip.  400mm with the 1.6x crop sensor was still frequently not long enough.  Adding my 1.4x teleconverter helped, but that put me at f/8, where my Canon 7D was unable to autofocus reliably except in excellent light (meaning I was back to manual focus).  I shot with the teleconverter about half the time -- only when the birds were so far off that the cropping at 400mm would have been excessive.  Next time around, I'll seriously consider renting either a longer lens or a faster one that can still autofocus with a teleconverter.  Although I took the 70-200 with  me, I never used it.  I think the widest shot I took (not including super-wide environmental shots) was about 200mm, and that was on a single eagle that flew overhead very near us.

My daughter started out using our Canon SX280 HS point & shoot camera, which has a 500mm effective focal length zoom lens.  The reach was OK, but the focus speed and grainy images quickly proved unacceptable.  She soon switched over to using a Canon 50D body with a cheaper Canon 70-300mm lens throughout the rest of the trip, and while she got a few shots of the closer birds, she really could have used something longer and/or faster.  It certainly wouldn't be worth a 6-hour drive if your longest lens was only 300mm.

When shooting birds in flight, it really helps to have a camera with lots of autofocus points.  The standard 9-point AF pattern on low-end Canon cameras (like the 50D) really sucks, because if your center focus point drifts off  the bird, the AF will hunt all over trying to focus on the sky.  The Canon 7D's 19-point AF pattern is much better, as the points are more densely packed and make it easier to keep at least one point on the bird.  I can only imagine how nice a 60-point pro body would be in this environment.

Although I brought my tripod and monopod with me, I never used either one because so much of our shooting was done at a steep angle overhead.  Even a nice gimbal head (which I'd like to own) seldom allows you to point the camera more than 45 degrees above horizontal.

As I mentioned before, there weren't many eagles at dam #14 near Le Claire / Pleasant Valley.  We saw maybe ten of them, but most were too far off to get interesting shots.  The one exception was an adult eagle that camped out in a tree right above the parking lot.  At one point, he flew out, grabbed a fish, and ate it in that tree for us.  I got a number of fun shots of him, but that was literally the only interesting thing to shoot in the hour we were there, which was a disappointment.  Most of the best eagle shots I've seen were taken at #14, so I had high hopes for this spot.  Maybe next time...

We eventually gave up on Le Claire and drove the 45 minutes north to dam #13 near Fulton, IL & Clinton, IA.  We spent about an hour there before sunset, but the hazy clouds made it a little dark for photography.  I was using ISO 4000 just to get a half decent shutter speed, which made for some pretty grainy shots.  The only open water was at the far side of the river, so most of the several dozen eagles were a long way off.  Even with a 900mm effective focal length (400mm + 1.4x TC + 1.6 crop sensor), there wasn't much worth shooting.  We did get to talk with lots of friendly photographers there, though, since none of us were shooting much.  The Corps said that there were 500-600 eagles there that week, but we didn't see nearly that many.  The following video was shot at #13 by somebody else a month before we were there.  The Corps said there were 1100 eagles there at the time:


We spent the next morning at dam #18 north of Burlington, IA.  The lock's observation deck is closed for construction until March, but the Henderson Creek Rec Area that surrounds the lock has a boat dock 100 yards downstream, so we parked there & walked up the shore until the lock itself started obscuring our view.  There were easily 1000 birds visible (confirming the Corps' count).  The open patch of water was mostly on the far 2/3 of the river, so we were too far away to get any shots of the birds pulling up fish.  There were lots of eagles flying directly overhead, though, so we did get plenty of close in-flight shots.  If the observation deck had been open, the angles and distance would have been better for fishing shots.  This video illustrates our shooting location on the bank below lock #14:


After an hour or so on the bank, we left the river and went back to the bridge where the lock's entry road passes over Henderson Creek.  It's maybe a quarter mile east of the river.  There were dozens of eagles roosting in the trees and playing on the frozen creek, and they were closer than what we saw on the river.  I managed to sneak up the side of the creek and get a few of my best shots of the eagles that didn't mind me getting close.  In retrospect, this was probably a bad idea, as it did scare off most of the birds.  This video shows the view from the Henderson Creek bridge:


All in all, it was a great way to spend a weekend with my daughter, but I probably wouldn't do it every year unless the conditions were great.


Have any of you ever been to view eagles at or near the Mississippi River?  Where exactly did you go, and what was your experience there?  Please share your stories in the comments below.