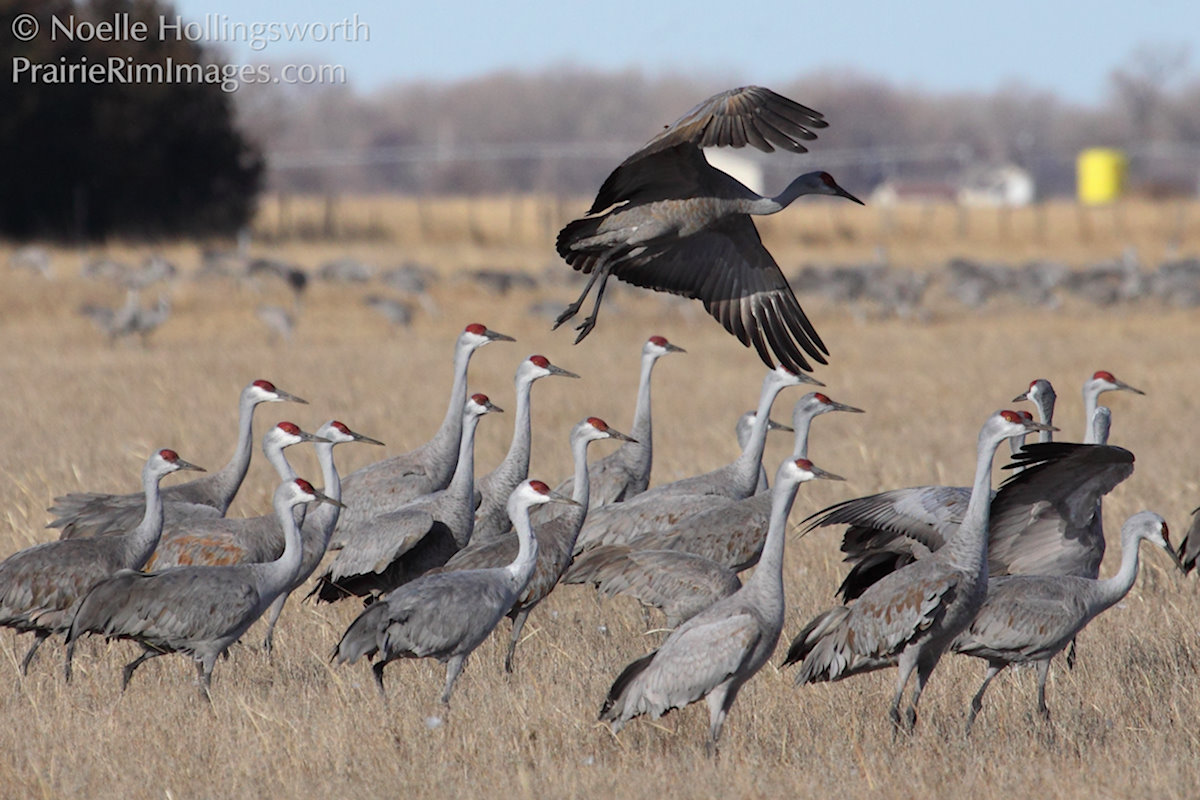 The cranes start arriving in Nebraska in late February, peak in the third week of March, and are pretty well gone by the second week of April.  In order to catch good weather, we usually schedule our trip for the last weekend of March or the first weekend of April.  This year, we moved it up a week and hit the peak of Sandhill Crane season on March 20-21.  We then had to move our trip up a couple days further due to a nasty weather forecast on our intended date, and that last minute reschedule prevented us from getting a spot in one of the riverside viewing blinds hosted by the Rowe Sanctuary (near Gibbon) or the Nebraska Crane Trust (near Alda).  Bookings for those blinds tend to fill up two weeks in advance during peak season.

You can read more about crane shooting in general and about my daughter's and my annual trips in other Prairie Rim Images blog posts.

We chose to take some better glass this time than we have in the past.  On our bald eagle trip earlier this year, I rented a Canon 100-400mm lens for myself, while Noelle used my old Canon 70-300.  For this trip, I rented that same 100-400 for Noelle to use on her Canon 50D body.  She loved the 100-400, despite the extra weight.  The extra reach and sharp focus got her a lot more keepers than in previous years.  In fact, most of the photos accompanying this article were shot by her. 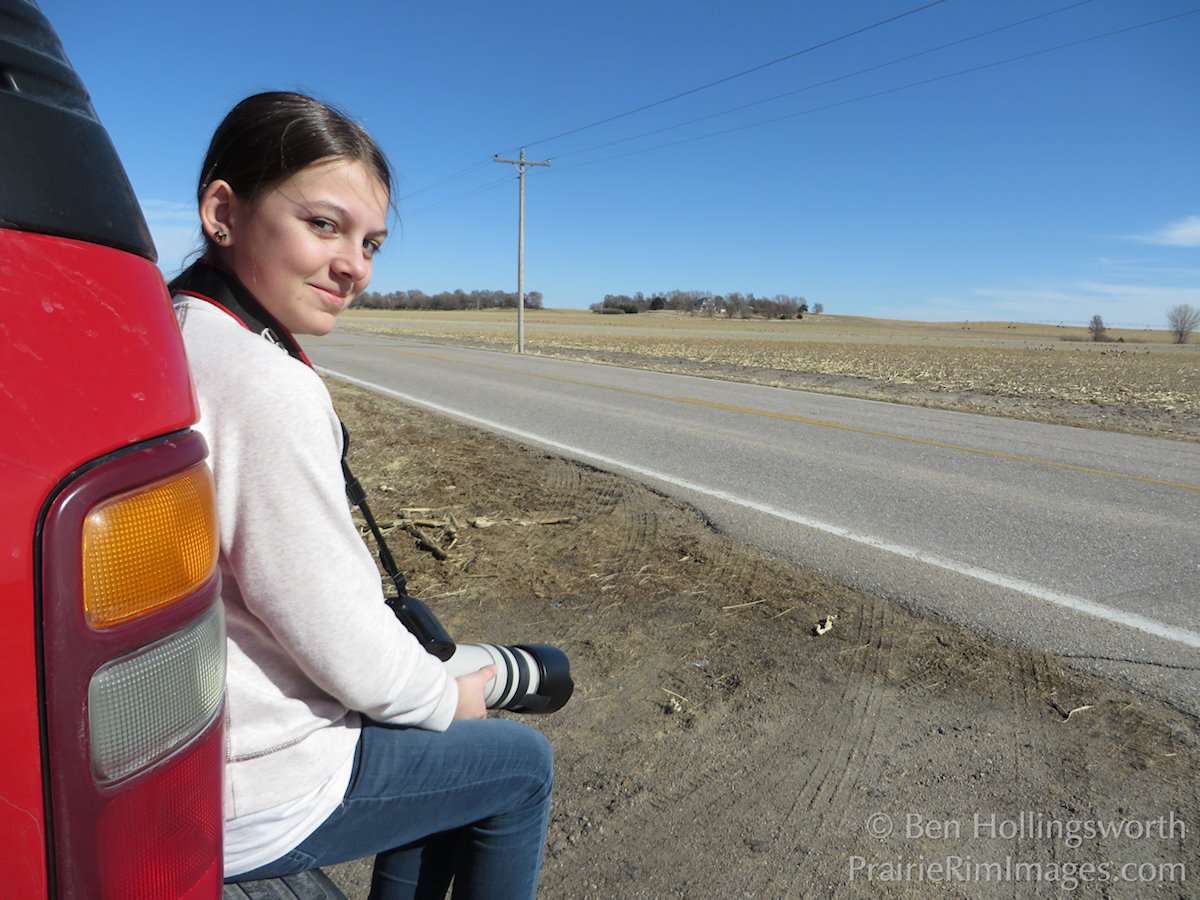 I planned to rent a Canon 300/2.8 and 2x teleconverter for my Canon 7D body, with my Canon 70-200/2.8 available for wider angle shots.  Rescheduling our trip at the last minute meant that the Canon 300/2.8 wasn't available to rent from our local camera store, so I borrowed a Sigma 300/2.8 from a friend.  The Sigma had semi-dysfunctional autofocus (something I knew ahead of time), but allowed me the improved 600mm reach that I hadn't had before.  Besides, if the AF turned out to be unacceptably bad, I could always switch back to my 70-200/2.8 with the 2x TC to get reliable AF at only 400mm.  I ended up shooting with the 300+2x almost all the time, and while I got a number of good shots, I also lost some good compositions to soft focus because of it.  I did love the reach, though.

I never did use the 300 without the 2x TC.  If I wanted a wider angle, I left the TC on the camera and switched to my 70-200 zoom lens.  I think I took about three shots with my Sigma 17-70mm lens when the light was really dark.  Otherwise, I used my Canon SX280 HS point & shoot camera for wide-angle shots and for video.  I never touched the Canon 10-22mm lens that I brought.

For shooting wildlife with big lenses, I'm a big fan of gimbal tripod heads.  They make shooting with long, heavy lenses a breeze.  I've borrowed a really nice Kirk head from a pro shooter friend a couple times, and decided it was finally time to pick up one of my own.  I couldn't justify dropping $600 on a top-tier head, so I bought a new Opteka GH1 gimbal head right before this trip.  It's obviously not as nice as a Kirk or Wimberley gimbal, but it still worked quite well at a fraction of the cost.  Expect a review in a future blog post.

As usual, we pulled off I-80 at Grand Island around 3pm, jumped over to the south side of the river, and started working our way westward along gravel roads.  We found several enormous flocks containing hundreds of cranes each on the roads just south of the Alda exit.  In our five years of shooting Sandhill Cranes, we've never seen this many birds in one place except during their nighttime roosts on the river.  We wandering westward during the afternoon and ended up at Ft. Kearney to watch the cranes return to the river after sunset.

Since we missed out on a viewing blind, we tried finding a decent gathering of cranes on our own for sunset and sunrise, but with lackluster results.  For the second year in a row, we were completely skunked at the Ft. Kearney SRA walking bridge.  The bulk of the birds didn't start appearing until it was too dark to photograph them, and even those were just flying overhead to a roost a couple miles east of the bridge -- probably close to the Gibbon highway bridge or maybe even toward the Rowe Sanctuary (the next morning, the Rowe staff told us that they had about 45,000 cranes along their stretch of river).  With a my 600mm lens, I did manage to get a few half decent photos of very distant cranes silhouetted against the sunset-tinted clouds as they flew toward their roosts.  None of those shots were worth the walk to the bridge, though.  Next year, I really want to get a sunset blind at Rowe.  Barring that, shooting from the roadside shoulder by the Shelton bridge may yield better results. 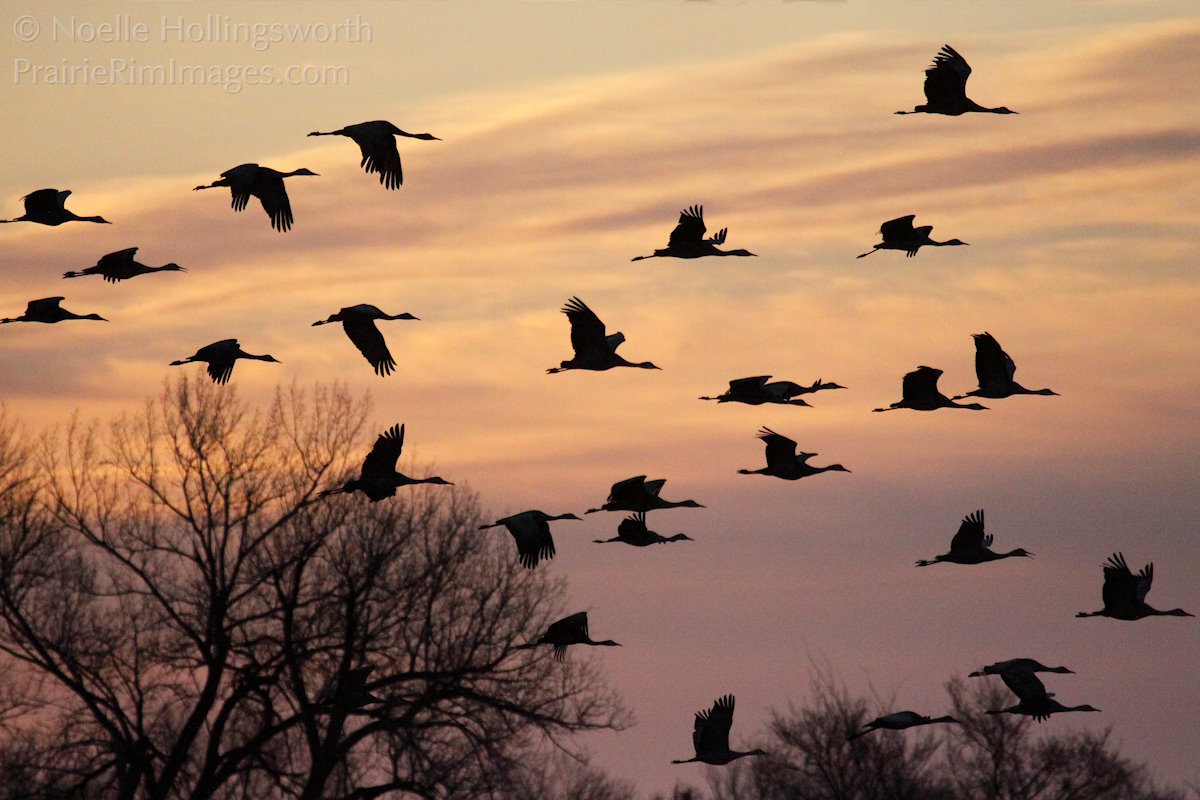 After sleeping for a few hours at a Super 8 in Kearney, we spent sunrise on Elm Island Rd between the Gibbon and Shelton exits.  We arrived about 20 minutes later than I had hoped to, which made it easier to find a gathering of 1000 or more cranes.  Alas, just as we were getting our cameras ready, an eagle spooked the cranes and 90% of the flock took off all at once.  It was quite a sight (and sound) to behold, but we weren't able to capture any of it with the cameras.  This was about 30 minutes before sunrise.  It really is worth the effort to arrive on the river at first light, about a 45-60 minutes before sunrise.

With very few cranes left on the river and lousy light on them, we quickly gave up and turned around to shoot the airborne flocks silhouetted against the colorful sunrise.  In fact, cloud conditions to the east enabled us to shoot roughly half of our morning photos with this orientation, from a variety of locations. 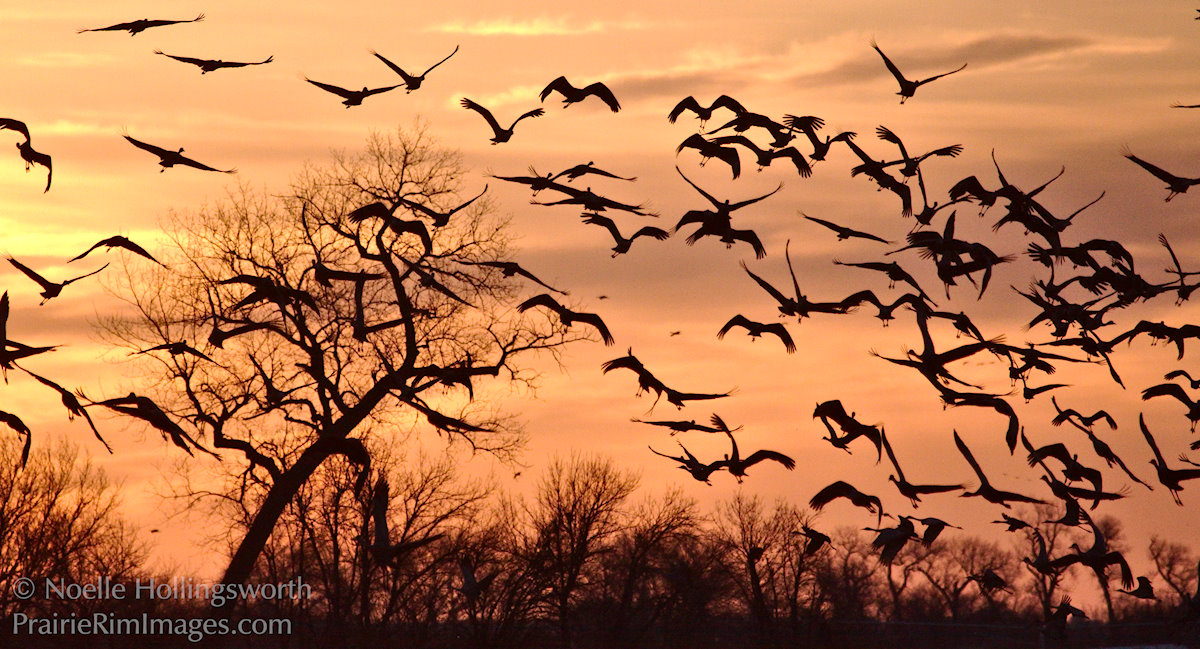 As is usually the case, we saw much more dancing activity from the cranes in the morning than we did in the afternoon.  The flocks were just as large as they had been the day before, but they spent more time aloft.  We saw a couple more mass takeoffs, but I once again missed the best part of them because my camera battery died at just the wrong moment.

We stayed in that vicinity most of the morning, stopping around 10am to visit the Rowe Sanctuary for a while before returning to the roads.  We finally returned to the interstate around noon to head back home.

If you'd like to see exactly where we traveled, check out the two following maps.  The first map shows our route on the first afternoon.  The second one shows our route on the morning of the second day.  Each pin represents a place where we stopped to take photos. You'll probably have to zoom out to see our entire route, because Google doesn't want to display our entire route by default. Sorry about that.


The following video is a composite of several video clips I shot that really show off just how many cranes there were, as well as just how few you could see from the Ft. Kearney bridge.

All in all, it was one of our best trips yet.  We took about 2800 frames (68 GB of raw files) -- two thirds of them mine.  It's great that we had so many great subjects, but unfortunate that there are so many images that I still haven't had time to go through my own shots yet.

If you ever have a chance to make it to central Nebraska in March, you should definitely take it.  This is one of the great wildlife spectacles in the world, and I'm very blessed to live nearby.  If you've got any questions or comments about this or any other article, don't hesitate to speak up in the comments below. 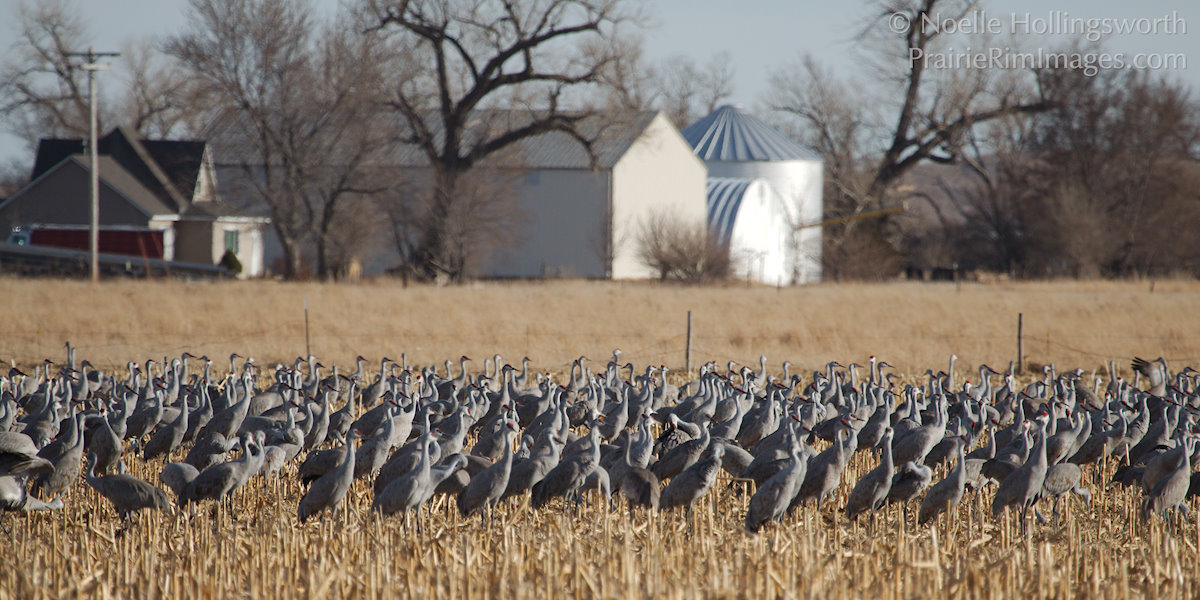