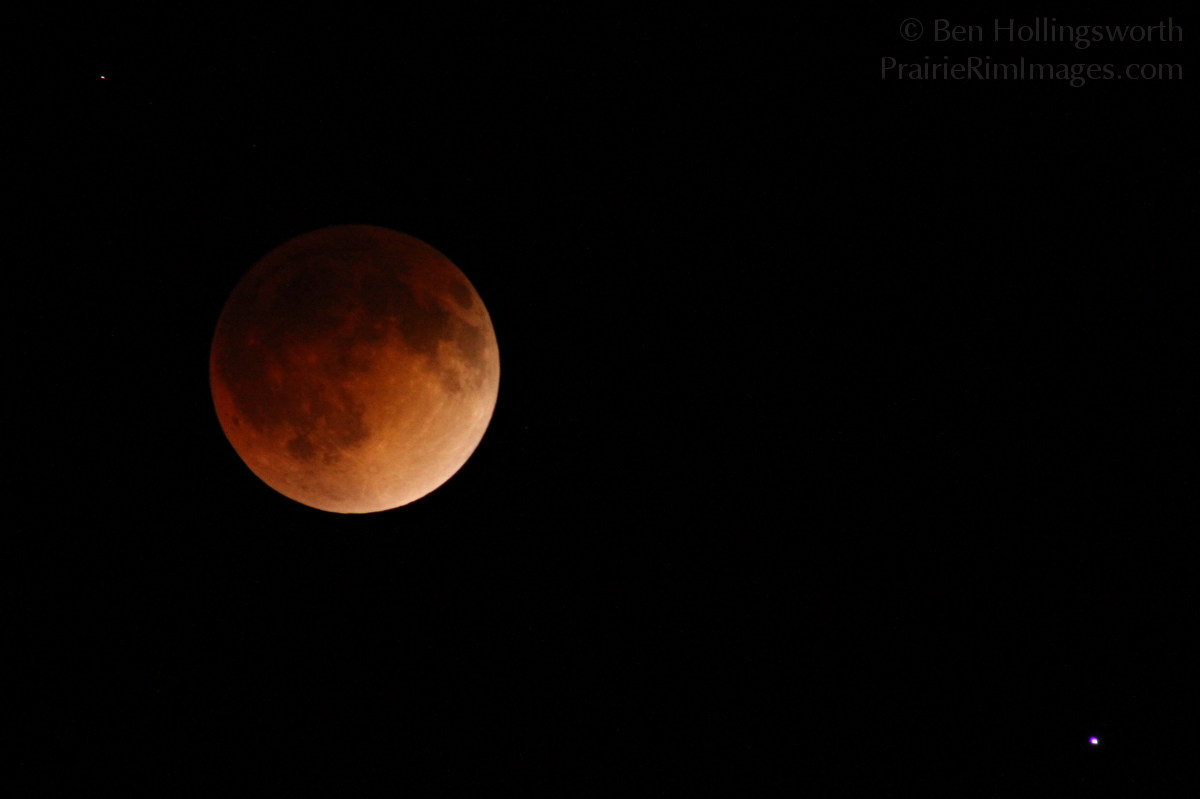 I've got three longish lenses, and I experimented with each of them earlier in the evening so that I knew which would work best once the clock started ticking during the eclipse.  All three of them were paired with my Kenko 1.4x teleconverter and mated to my Canon 7D body, then mounted on my Manfrotto 055XProB tripod and Opteka GH1 gimbal head.  The gimbal makes it easier to balance these long lenses, but the mechanism isn't as easy to lock down into a precise position.

First up was my Canon 70-200/2.8 IS lens.  It has by far the best image quality of the three lenses, as well as being the only autofocus lens of the lot, which would have enabled me to shoot at a wider aperture and faster shutter speed.  However, with the teleconverter, it had an effective focal length of just 280mm, which was on the small side for moon photography.  I feared that cropping significantly would lose any image quality that I might gain from using the more expensive lens.

Next up was my old ENNA-Munchen Tele-Ennalyt 400mm f/4.5 lens.  This is a manual focus lens with an Exakta mount that I picked up at a garage sale for $5 a few years ago.  Unfortunately, it's pretty soft wide open, so you need to stop it down to at least f/8 to get rid of chromatic aberration.  Since I didn't trust my manual focusing ability at night, I would have used it at f/16 anyway.  The results were, surprisingly, not much different than the 70-200 after you cropped way in on the latter's wider field of view.

The final contestant was another manual focus beast, and the one that's been in my collection the longest:  a Tele-Vivitar 400mm f/5.6 in M42 mount.  At f/11 and f/16, this lens seemed to provide sharper images than the ENNA lens or the scaled-up Canon.  I chose it to use during the eclipse later that night.

When combined with my 1.4x teleconverter, the 400mm lens gave an effective focal length of 560mm.  If you add in the 1.6x crop factor of my 7D's APS-C sensor, that's akin to 896mm on a full frame sensor.  This worked out to be a pretty good focal length for this eclipse, because it filled the frame with the moon and two nearby stars (Spica to the lower right and a lesser, unidentified star to the upper left).  I did, however, have to constantly re-aim my tripod in order to keep a decent composition as the earth spun.

When shooting the full moon, I got a good exposure using ISO 200, f/16, 1/60s.  When the moon fell completely into the earth's shadow (as in the title image), the exposure fell to ISO 3200, f/11, 1s.  I set my camera to mirror lockup with a 10 second timer in order to kill the vibrations for the shot, but I still found that a 2 second exposure produced noticeably more blur than did a 1 second exposure.  If I had been using a wider aperture lens with reliable autofocus (for instance, a 300/2.8 lens with a 2x teleconverter), I could have used a faster aperture and a lower ISO setting, which would have improved the image quality substantially.

To help counteract the high ISO noise, I took a "dark frame" toward the end of my photo session.  By shooting with the lens cap on at the same settings that I'd been using all night, I was able to capture a frame that contained only the noise inherent in the sensor.  Using GIMP (or Photoshop, if you prefer), I then subtracted this dark frame from my primary image to remove the worst of the ISO noise without affecting the overall sharpness of the image.

The resulting images were just OK, and really no different than 1000 other images that well-equipped photographers captured that evening.  For me, the best part about this eclipse was sharing it with my 12-year-old daughter, who had me wake her up at 2am on a school night so that she could watch the event with me through her binoculars.

If you missed this lunar eclipse for whatever reason, your next chance is Wednesday, 8 October 2014, followed by Saturday, 4 April 2015 and then Monday, 28 September 2015.  North American viewers should also watch out for the partial solar eclipse on the evening of Thursday, 23 October 2014.  Find more eclipse info at NASA's eclipse web site or at TimeAndDate.com.

If you've got any questions or comments, or if you can identify the faint star the the upper left of the moon, please speak up below!
Posted by Obi-Wan at 8:00 PM