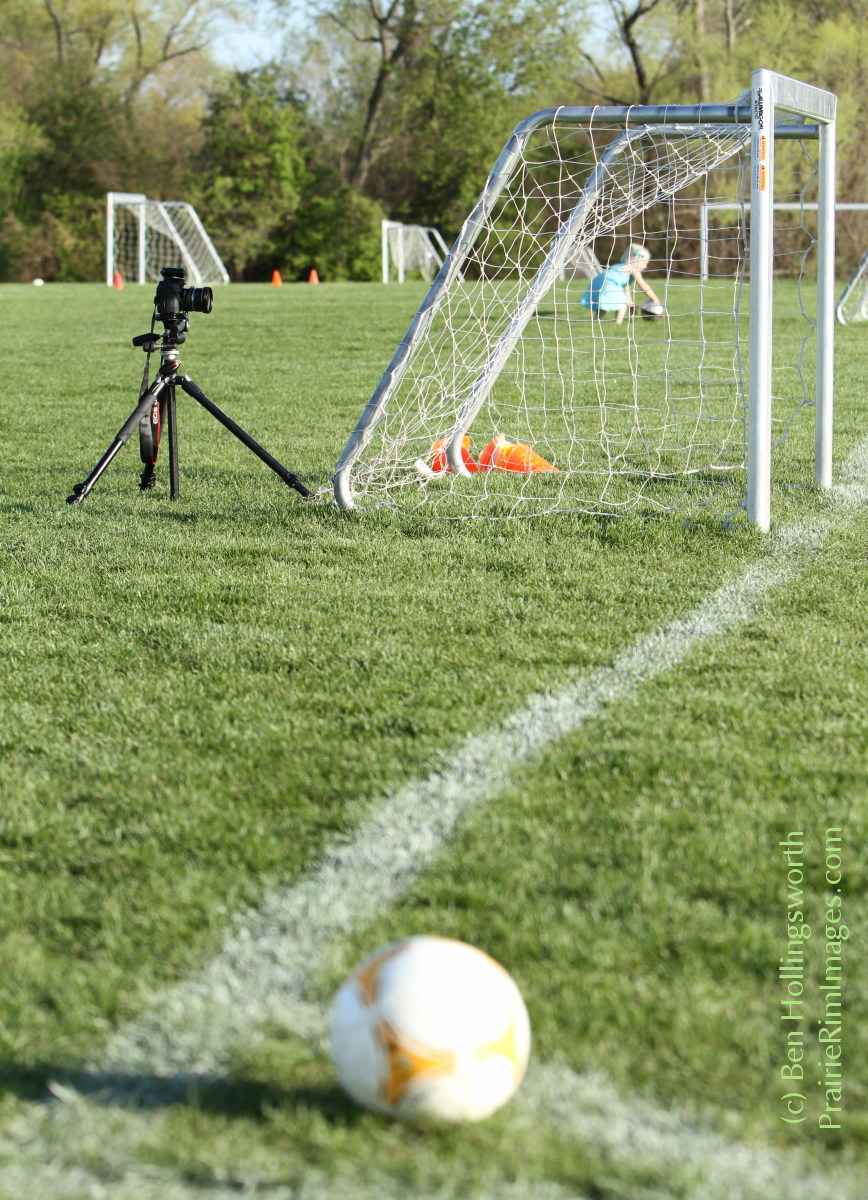 As outlined in Kelby's blog, the theory is pretty simple.  You hook a radio trigger transmitter up to the hot shoe of the camera you're holding in your hand.  You hook up a radio trigger receiver to a remote camera located in some other location.  The receiver is connected to the camera's remote shutter / cable release terminal, like Nikon's "10-pin" or Canon's "N3" ports.  Now, when you trip the shutter on the camera in your hand, it will signal the remote camera to fire at the same time.  This is great for sports, because it allows you to capture two different angles of an event at the same time.

Pretty much any radio trigger will work for this, from the cheap eBay flash triggers up to the pricey Pocket Wizards.  I use Cactus V4 triggers, and may upgrade to Phottix Stratto II's or Yongnuo YN-622's soon.  Some flash triggers advertise that they will also trigger your shutter, while others don't.  Ignore that.  All that's really required is that the receiver has a port into which you can plug a cable which feeds to your flash's PC sync or your camera's shutter release port.

If your radio trigger didn't come with a shutter cable, you can buy one from Ubertronix or Amazon.  Similar cables (of unknown quality) can be found on eBay for under $10.  I own an Ubertronix StrikeFinder lightning trigger, which came with the proper cable, so I just repurposed that to use with my flash triggers.

Having a remote camera means that you also need someplace to mount it.  A tripod will work for many people.  If you want an inconspicuous, low vantage point, an Fplate will allow you to securely set your camera right on the floor.  If you want a higher vantage point, a Magic Arm or Justin Clamp might fit the bill.  It all depends on where you want your remote camera to be located.

If you're shooting sports, chances are you'll have your cameras on "rapid-fire" at the fastest frame rate possible.  If your handheld camera can shoot faster than your remote camera, then your remote camera will miss a few frames, because it won't yet be ready to fire a second shot when the handheld camera fires its second shot.  For example, with my Canon 7D (8 fps) handheld and my Canon 50D (6 fps) remote, the 50D misses every other shot that my 7D takes.

Don't forget to start your remote off with a full battery and an empty memory card. It also helps to disable the "auto-off" setting so that your remote camera doesn't go to sleep on you.

Setting everything up was straightforward.  I'm limited to using my tripod for now, which works fine.  I pre-focused the remote camera, set the exposure settings (with a small aperture to keep everything in focus), and then plugged the cable into the remote shutter port.  I mounted the radio receiver in the hot shoe, and plugged the other end of the cable into it.  The radio transmitter was installed in the hot shoe of my handheld camera.  A couple test fires verified that everything was working (after I set the transmitter & receiver to the same channel... whoops).

For the way I shoot, I usually put an ultra-wide lens (like my Canon 10-22mm) on the remote camera.  If the action will always be in range of the remote lens, then life is easy.  Such is the case when photographing kids jumping bicycles over a ramp.  I put the remote close to the ground and far enough off to the side of the ramp to keep it safe if somebody crashes.  Both cameras work in sync, each shooting a burst of frames for every single jump.

One thing I learned after my first soccer game is that you sometimes need to keep firing the handheld camera after the "good" action is over, just so the remote will keep following the ball and players into the goal.  You have to train yourself to think about both camera angles rather than just the one you're seeing.

I've also used the same remote trigger setup to fire a "camera on a stick."  When I want to get an overhead shot of something, I'll put my ultra-wide lens on a monopod, pre-focus it, and hold it way up overhead.  The camera has the remote trigger plugged into its shutter release port, and I'm holding the transmitter in my hand so I can manually fire it.


In addition to shooting from two places at once, shooting with remotes allows you to discretely shoot from locations from which you couldn't shoot in person without being a distraction.  The down side is that, if you only have two bodies, you've now dedicated one of them to a fixed location, and don't have it available to use with a second lens attached for those time when the action gets too close to use your telephoto.

What tricks have you used to get interesting angles of commonplace events?  Please share them in the comments below!
Posted by Obi-Wan at 8:00 PM