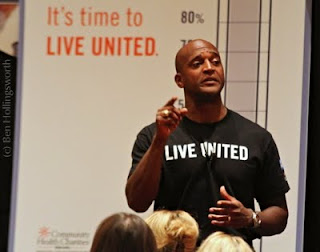 A few days ago, I had the opportunity to photograph the local United Way / Community Health Charities' Campaign Kick-Off breakfast / tailgate party, which featured inspirational speaker and former Husker football player Aaron Davis as the keynote speaker.  Football season has started, and along with it the main fund raising campaign for the United Way.

Aaron is a very fun speaker.  Perhaps he cranks it up a notch when speaking to Husker fans in Lincoln, but I got the impression that his personality would be like that no matter the venue or audience.  Aaron was joined by a performance from the Lincoln Southwest High School Show Choir "Resonance," tunes by D.J. ROMEO, and acrobatics by the LIVE UNITED Pep Squad, which performed sideline-style stunts while everybody ate.

The United Way is a great charity that raises money for lots of humanitarian causes.  Two thirds of the money they raise goes to help children in and around Lincoln, Nebraska.  I've photographed a number of events for them this year, and it's always a good time.  Photos from several of these events can be found on the Prairie Rim Images commercial web site.  Below, you'll find just a few photos from the tailgate party to give you a feel for the event.  You can view the morning's entire collection here.

All in all, it was a good time.  My primary flash was acting up sporadically, which gave me some frustration.  The dim lighting also underscored my need to get a better second body; my 7D does fine at higher ISO, but my little old Rebel just doesn't cut it.  I'll be replacing the Rebel with a 50D as soon as Canon gets more refurbs in stock.  I'd love to be able to dump about $3000 into upgraded lenses (f/2.8 with image stabilization) for environments like this, but it's hard to justify the cost while I'm shooting primarily charity work.  To help me toward that goal, feel free to patronize a few of the advertisers you see on this page.

In these darker situations, I try to put my wider lens on the body with the lower ISO since it can tolerate a slower shutter speed before camera shake becomes apparent.  This means my Rebel wore the ultrawide 10-22mm lens most of the morning.  I also tend to abandon my typical manual exposure mode in favor of aperture priority.  When every extra stop of light counts, and when using variable-aperture zoom lenses, it's best to set the camera aperture wide open at the widest zoom setting and then let the camera adjust the shutter speed accordingly when you zoom in with a smaller aperture.  Of course, aperture priority doesn't make things foolproof.  The required over/under exposure setting will differ when you're shooting a black man in black clothes against a black backdrop vs shooting a blond girl in a white shirt against a yellow wall under the same light.  Yes, I encountered both situations that morning just a few minutes apart.

Events tend to thin out now during the fall and winter.  You can read about a couple of the other charity events I shot earlier this summer here and here.

As always, if you have anything on the subject that you'd like to share, please speak up in the comments below.
Posted by Obi-Wan at 10:51 PM