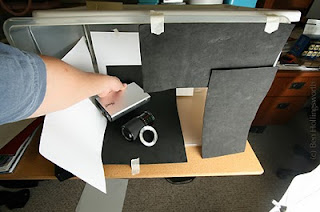 I have an ongoing series of posts here at Prairie Rim Images in which I highlight many of the older, manual focus lenses which I love to use.  Because these are relatively small subjects, many of the photos that I take of these lenses can be made in a simple, table top studio made of parts scrounged from around my house and lit with only a single light source.

You can buy table top light boxes in various sizes ranging from 16" to 32" for less than $50.  These light tents collapse down into a flat package much like a reflector will, which is great for storage and portability.  But what if you're on a tight budget and never need the studio to leave your own basement?

In our kids' basement play room, we store many of their toys in large, clear, rubbermaid-style tubs.  I empty one of these 24x16x16" tubs and use it as the shell for my DIY light box.  I lay the box down on its long side and line the inside walls and top with a few sheets of white printer paper.  I line the inside of the box, not the outside, since the plastic box itself will create a very specular reflection.  I use a variety of printer paper or craft foam (which comes in 12x18" sheets for $2 each) for my lower surface and background.

My light source is generally a 32" white shoot-through umbrella positioned just to the right of my camera.  However, because the box itself is transparent, I could bring the light in from any direction I choose.

I'd like to show a specific, behind the scenes example of how I made the title illustration (shown at right) for my article on the Yashica ML 75-150mm f/4 telephoto zoom lens.  The lens itself is about 5" long and 2.5" in diameter with a black, semi-gloss surface.  I also wanted to display a chrome C/Y-EOS adapter leaning up against the lens.  I needed detail on both the black lens and the chrome adapter.  The lens had great texture that I wanted to highlight on the knurled zoom/focus ring.  I also wanted any reflections on the front glass to be minimized.

In order to keep the lens -- or any round subject -- from rolling around on the surface, I positioned my car key behind it, out of sight of the camera.  A little wad of masking tape would probably work just as well.  Just make sure that your "anchor" isn't visible underneath the subject, and that it doesn't cast its own shadow on the background.

This foam catches the light better than something like black velvet, so in order to keep the light source from turning the foam light grey (see photo at left), I located the flash head low -- almost at the same height as the subject.  This scrapes the light across the lower foam surface rather than hitting it dead on, which keeps it dark.  Alas, the background will still be light.

Because the subject lens was positioned 45 degrees to the camera and perpendicular to the light source, I positioned another sheet of white printer paper directly in front of the lens, just off camera left.  This caught enough of the flash light to illuminate the front bezel of the lens with its identifying text and also provided some nice highlights on the front surfaces.

One of the dominating features of this lens is its knurled focus/zoom ring.  I wanted to highlight this texture and provide some background separation between the lens and the foam.  To do this, I needed a narrow, reflective surface about 6" long which I could hand hold behind the lens barrel to provide a rim light across the knurling.  I found such a surface in the form of a silver USB hard drive case. It took some experimentation to hold it at just the right angle to reflect light onto the back side of the lens without illuminating the background that I had so carefully masked.

So that's about it.  A handful of simple, household materials were scrounged to create a very capable small product light tent in which quite attractive product shots may be made.  Be aware of your surroundings.  Be resourceful.  Keep your hard earned cash for more important things.

If you're looking for a more polished (but still DIY) solution that can change shape and still break down for easy storage, check out this DIY idea.  Or, if you're travelling light, try using just a couple sheets of printer paper.  For other dirt cheap DIY light mods, read about this soft box or this bounce card.

As always, if you have any questions or suggestions, please leave them in the comments section below.
Posted by Obi-Wan at 8:00 PM