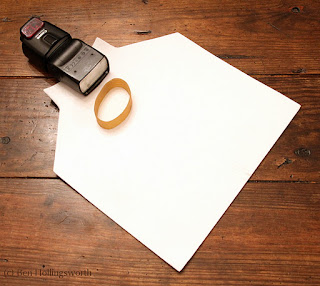 On-camera speedlights are great.  You can angle them numerous directions to bounce your light to your subject while still having the ease of use of TTL lighting.  Alas, if you don't have a bright, neutral surface against which to bounce your light, the shadows resulting from direct flash can be pretty harsh.  I got around this problem recently by using a dollar's worth of materials to make a great, portable diffuser for my on-camera flash.

While researching lighting options for shooting a gig in a very large, very dark room, Nadine OHara (a wedding photographer from the SF Bay area) offered the basis for my idea in this photo.net thread.  Hers is a very polished option.  The side slits and velcro tabs allow you the option of either shooting straight up with a little bit of fill, or bending the reflector down to block direct light and kick everything back toward the subject from a much larger surface than the flash's bare lens.  The only down side is that the resulting bounce surface is still a bit on the small side if your goal is to produce soft shadows.  Of course, the corollary to that is that it doesn't attract quite as much attention as you're moving about an event.

For personal use around the house and studio, I started with that idea, but made something quite a bit larger and not quite as polished. 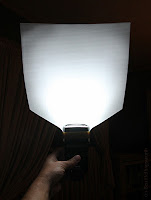 I held it up against my flash and took pictures of it in a dark room to find out just how much of the foam really got lit up by the flash.  I wanted my surface area to be as large as possible for the softest shadows, but I didn't want it to be any larger and bulkier than necessary.  Experimentation told me to keep the full 12" width and cut it to 13" long, with the corners closest to the flash tapered at a 45 degree angle (see the title photo).

I wrapped the end of the foam around my flash head using a large rubber band, sold in a pack as "rubber band clamps" from a woodworking supplier.  Three bands from that set fit my flash heads perfectly.  For a more professional and more expensive look, you can also use the Honl Speed Strap.  You could even glue a few strips of velcro around your flash head and use them to attach all manner of modifiers.  I already had these rubber bands, so I didn't count them toward the cost of the light modifier.

For commercial competitors, this reflector is actually quite similar to the Rogue FlashBender, which costs about $40, but is more versatile and has a more professional look.  If you prefer a traditional soft box of a similar size and price, the Lumiquest SBIII is highly recommended.

My resulting reflector is quite large -- enough so that I might feel a little conspicuous using it to shoot a professional event.  If I were to do that, I would definitely cut a matching sheet of black foam and glue it to the back side of the white reflector.  I'd also round off the front corners. 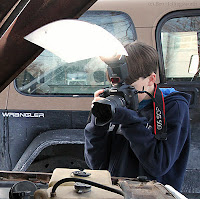 One down side of this simple approach is that most of the flash's light rakes across the reflector and shoots out the other end (see the pattern on the hood in the above shot).  Sometimes this is just want you want, as when you're bouncing some of the light off a ceiling for ambient fill.  Other times, it's just a waste of power.  With a simple sheet of foam, you don't get the option.  I originally wanted to follow Nadine's lead and cut slits to allow me to angle the reflector down across the main light trajectory, but I wasn't sure how to securely attach the velcro tabs to the foam.  Maybe I'll do that someday, or maybe not.  If I do, I'll update this article. 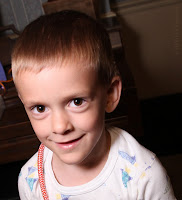 The results are great, especially considering the time and materials that I sunk into the diffuser.  You can even point the flash sideways (rotating the foam 90 degrees around the flash head) to put the reflector quite a ways off to one side for some more dramatic portrait lighting -- all on-camera.  I used it recently to light many of the interior and engine photos of a truck I'm trying to sell, and the results look far more natural than the bare flash that I initially started using.  All in all, it's a great speedlite lighting modifier for photographers on a tight budget.

In the examples below, note how hard the shadows are in the bare flash shots compared with those using the diffuser.  As always, click the images for larger versions.

This is especially cool if you're into non-studio macro work.  In the lower right photo above, notice how well the immediate foreground is lit.  If you were able to sneak up on a tiny bug or flower with that giant white flag over your head, you could emulate a wonderfully soft, overcast sky using just your on-camera flash with this simple diffuser.  Gone are the days of your lens casting its own shadow into your scene.

So what's your preferred method of softening on-camera flash?  I'd love to hear any tips for other lighting mods that work really well, regardless of whether they're DIY or commercial products.  Please speak up in the comments below.
Posted by Obi-Wan at 8:00 PM