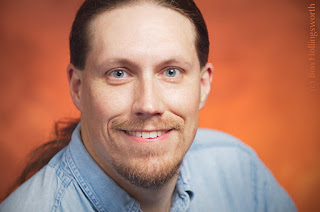 I was recently asked to make some business portraits for an entire company of 13 people.  Since most of them were salespeople and rarely in the office at one time, and since that office was 60 miles from my base, it was decided that I would shoot these head shots during their annual Christmas party, because they would all be in once place and dressed up anyway.  I've worked with this company before and will again, so I wanted to make this session happen despite sub-optimal conditions.  Given the unusual situation surrounding this session, I figured I'd share it with you all.

The event was held in the party room of an Omaha restaurant.  After negotiating with the event organizers, our plan was to setup the photo equipment in an open area of that room.  Everyone was to show up a half hour early for the individual portraits, followed by a quick group shot and then dinner.

Even in ideal conditions, 30 minutes isn't much time for 13 portraits.  I lobbied to start earlier, but the organizers didn't feel they could get everyone there any earlier after work.  The end time was non-negotiable, as there was another event awaiting this group after dinner.  I knew I needed to have all my ducks in a row before people arrived, so I spent an evening earlier that week nailing down the poses and lighting setups so that I didn't have to experiment once my subjects arrived at the party.  I wanted to simply setup my gear according to a predetermined diagram as soon as I arrived. 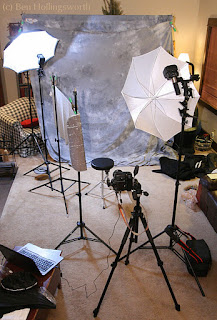 I needed the poses and lighting to look good, but still be as simple as possible.  Not only would I be pressed for time, but I'd be transporting my backdrops, lights, etc into a party room that was already smaller than I wanted.  I came up with two poses -- one traditional and one slightly more personal and intimate.

In the center of the open space sat the stool on which the subjects would sit.  (It was borrowed from my son's drum set.)  Six feet behind that hung my mottled grey backdrop, which, along with the backdrop stands, I had just purchased for peanuts from an old photo studio that was being vacated after the owner died.  You always want some distance between your subject and the backdrop so that you can control the background light and keep it somewhat out of focus.  The more traditional shot positioned the camera six feet in front of the stool, sitting on a tripod with a 70mm lens.  It was set at 1/180s, f/4.5, ISO 125. 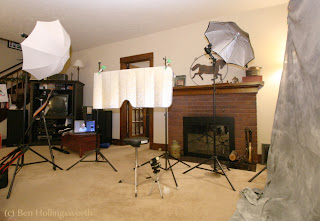 Just to camera right, six feet off the ground, sat my key light: a Sunpak Auto 544 at 1/4 power with a 32" shoot-through umbrella.  The hair light sat exactly opposite the subject from the key, at 1/16 power into a 32" reflective umbrella (angled to keep light off the backdrop).  A third light (at 1/64 power) sat on the floor directly behind the stool and pointed up at the backdrop to create a bright spot behind the subject's head.  To fill in the shadows to camera left, I hung a silver reflector (an automotive window shade) between two more light stands at shoulder-height to the subjects.  This reflector was positioned just out of frame, about 18" from the subject.

A 70mm lens on an APS-C camera six feet from the subject was really a wider spread than I needed, but it allowed me the flexibility to shoot different subjects without repositioning the camera for each shot.  An 18MP sensor allowed plenty of room for cropping, since corporate head shots are never printed very large.

For posing, I asked the subjects to turn slightly toward the key light (camera right) and lean slightly toward the camera.  Their expression and gaze should invite the viewer to get to know them better, rather than be a stiff pose for a wall-hung portrait.  These are mostly salespeople, after all.

For the second, more intimate portrait, I tweaked the same basic lighting setup, but without the hair light.  I swapped in a 90mm f/2.5 lens and used a horizontal camera orientation, which cropped the subject just below the neck and just below the top of the head.  The tight crop combined with the shallow depth of field  (focused tightly on the eyes & smile) can really draw the viewer in to form a relationship with the subject.  To add some pop, I placed a colored gel over the background light.  The power on the key light was dropped by 1.5 stops to match the wider aperture, and the background light was adjusted to suit each colored gel (some of which block more light than others).

The day of the shoot, we got the biggest snow fall of the season to that point.  Driving to the site would have taken me an hour in perfect conditions.  I left home at 3:00 so I could get to the site by 5:00 and have everything setup and ready when people started arriving at 5:30.  I made it just in time.

Unfortunately, the 15x15' open space that I had been promised for the photo area was not quite that big, and it was literally right in the middle of the U-shaped table arrangement.  Of course, the serving staff also expected to walk through this space, which meant that I had to not only finish shooting, but also tear everything down before dinner could begin.  It's a good thing that I brought sandbags to weight down the base of my stands, because they were constantly getting kicked. 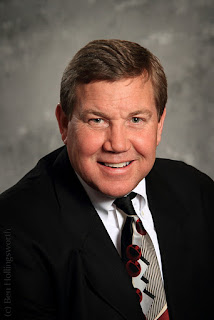 Remember the snow storm?  As 5:30 came and went, only 3 of the 13 employees had arrived.  Apparently, I was the only one who thought far enough ahead to compensate for bad road conditions.  Only half of them had arrived by 6:00, so I scooted all my gear up against one wall during dinner, and we scrambled to finish the rest of them (and the group shot) afterwards.  Because of the small room, this meant that we had to kick half the guests out of their seats before desert to make room for my lighting gear, which was far from ideal.  Of course, this put us nearly 45 minutes late for the after-dinner event, but that phase was still able to accommodate us.

The hastily-assembled group shot had people lined up 3-deep so that they could fit within the width of my 9-foot backdrop.  Even then, I had to clone in a bit of background on each side in post.  Two lights, both shot through umbrellas at full power, were about 30 degrees to camera right and 60 degrees to camera left.  We did two poses -- one traditional, and one with everyone goofing off.  This is a wireless services company, so we had everybody grab a cell phone and start talking.  That was by far the better of the group shots, in my opinion. 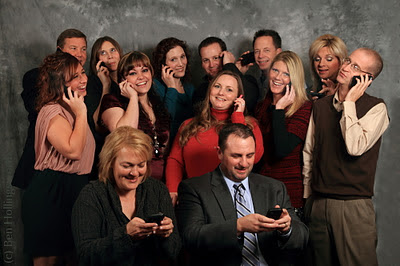 Overall, it was a frantic shoot, which caused some problems that I hopefully will learn from and not repeat.

First, some people are downright uncomfortable in front of a camera, no matter what.  I'm not the best coach in that regard, which doesn't help.  When planning these poses with my own self portraits, I thought they were pretty good.  I guess I'm a lot more comfortable around cameras than most people, because it was hard to get the desired look out of many of the folks.  In fact, we completely scrapped the less formal pose (my personal favorite) because most of the employees didn't think they could look like that.  I'm used to people avoiding my camera at family events, but I expected more eager cooperation from people who were paying me to photograph them.  One of my primary photography goals for the upcoming year is to improve my subject-coaching skills.

That said, we did get some fun outtakes when people were screwing around between shots.  The down side of having your camera locked to a tripod is that you sometimes miss (or mis-frame) moments like that.


Second, always assume that a session will take longer than it should.  Something will always pop up to delay you.  If you think the allotted time going to be too tight, you're right.  Do the math, and resist the urge to say, "We'll just make it work" when you don't know how that's possible.  Remember that if you're being hired as a photographer, the client wants your expertise more than your equipment (whether they realize it or not).  Don't be afraid to speak up when something has to change in order to give the client great results.

Third, it's easy to make stupid mistakes under pressure.  A high percentage of the photos that night turned up out of focus.  Fortunately, I got at a couple good ones of each subject, so it worked out OK.  (I've already ordered a new lens that should perform better in that regard.)  Despite the time crunch, it's important to zoom in all the way on each shot to verify that's it's as sharp as it needs to be, and I didn't.  One of my flash triggers was also acting up frequently.  I worked around it, but not as smoothly as I could have had I been more at ease and thinking clearly.  I'll be upgrading my flash triggers soon as well, because a $30 radio trigger shouldn't ruin a job that big.

Fourth, this was the first time I'd done any serious, portrait-quality retouching.  I was pretty happy with how it turned out, but it took far longer than I'd expected.  See point #2.  Some of it could have been easier if I'd dialed in the lights better on location.  The key light bounced differently off the walls on location than it did in my studio (aka living room), which lit the background differently than I expected.  Also, I overlooked a simple incorrect camera setting that cost me 2.5 hours of postprocessing.  See point #3.  I'm starting to think that the hundreds of dollars that some photographers spend on high-throughput editing software might actually be worth it.


If you include the playing around I did with different poses before the shoot, plus the travel time through the snow, plus the postprocessing just to correct a couple stupid mistakes, I spent 29 hours shooting head shots for 13 people.  Fully half of that was due to extenuating circumstances, but it's still a long time.

In the end, the clients were happy with the resulting photos, and they understood that their own tardiness contributed to the abbreviated session.  Everything turned out OK, and I'm a better photographer for having been through this.  I'm also a better-equipped photographer, because this shoot exposed the severity of the shortcomings in some of the gear I had been using, so I got to go toy shopping.

I debated whether to expose all of my own shortcomings in this public forum, or whether to just mention the good things so that you'd be in awe of my skills.  In the end, I decided that we all learn more from mistakes than from successes, so hopefully this version of the story will be of more use to more people without scaring off future clients.  Future clients, please re-read the part about how I'm a better photographer now.

What stories do you have to tell about shoots gone bad?  Misery loves company, so please speak up in the comments below.
Posted by Obi-Wan at 9:28 PM