Adding a miniphone sync port to a Sunpak 544 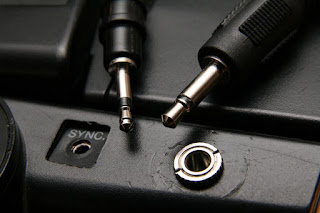 I love my flashes, thanks in large part to David Hobby. One of the things that David is constantly promoting is his preference for using 1/8" (3.5mm) miniphone audio cords instead of the older, standard PC-sync cords for syncing flashes. PC jacks are notoriously unreliable as well as ludicrously expensive. Miniphone jacks are both more reliable and dirt cheap. Even better, the Cactus V4 radio triggers that I use come with 1/8" sync ports built in. Unfortunately, none of my flashes came with them. My old Sunpak Auto 544 "potato masher" flash came with a proprietary jack, but when that jack started to flake out on me, I figured it was time to add a miniphone plug to it. 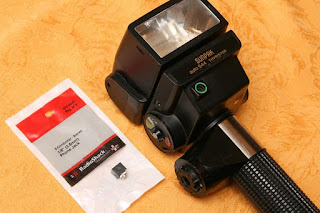 I bought a 2-pack of stereo 3.5mm jacks at Radio Shack (part number 274-0249) for $2.99. These jacks require a 1/4" hole to be drilled into the surface where the jack is to be mounted, and require about 3/8" of clearance behind that surface inside the flash. My plan was to locate the miniphone jack right next to the factory jack and wire the two of them in parallel. Michael Bass makes new shoes for Canon flashes that have a miniphone jack already in place, and that seems to be the only way to add such functionality to the 430EX and 580EX Speedlites.

Of course, once you get these spiffy new jacks, you'll want to get some inexpensive 1/8" audio cables to plug into them. Check out these options from All Electronics and Deal Extreme for short cables, or this Y-splitter from Deal Extreme.  Just remember that you get what you pay for.

Before I begin the instructions, a word about safety. The capacitor that powers a camera flash stores a huge amount of current and dispenses it at hundreds of volts. Once charged, the capacitor will store this electricity for a very long time, even if you turn off the flash and remove the batteries. If you happen to touch the capacitor terminals, you'll experience this first hand. At best, the jolt will really get your attention. At worst, it could cause physical harm or even death. If you've got a bad ticker or use a pacemaker, don't go anywhere near the inside of your flash. It's simply not worth the risk. If you're able to pay attention to what you're doing and avoid touching exposed terminals, then read on to find out how to add a sync port to various flashes. It should go without saying that this procedure will void any warranty that may still remain on your flash. I've performed this procedure on my own flashes, and it all worked fine, but I offer no guarantee that you won't screw something up and render your own flash unusable. It happens to the best of us. Proceed at your own risk.

Of the several flashes to which I've added a miniphone jack, my Sunpak 544 is the flash that really needed it, since the factory sync port was starting to flake out on me and sometimes wouldn't fire until I wiggled the plug.

Figuring out how to disassemble the flash was no easy task. First, you must remove the collar that holds the mounting arm to the vertical flash handle. Disconnect the arm, then loosen the two philips screws enough that the collar will slide off the end of the handle.

Next, point the flash head straight up and rotate it 90 degrees to one side. This will expose two screws on each side of the hinge in the lower section of the flash body. Remove the two screws on the front half of the seam. There's no need to remove the screws in the back half.

Now comes the tricky part. Sunpak has a reputation for hiding screws underneath stickers and labels. On the bottom of the flash handle, around the 1/4-20 screw mount, is a black sticker about 1mm thick. Use a small, sharp blade to pry off this sticker. Under it, you'll find two screws that hold together the two case halves at the bottom of the handle. Try not to bugger up the sticker. In my case, there was still enough adhesive left on it that I didn't have to add any upon reassembly.

Finally, use a screwdriver or putty knife to pop apart the clips on either side near the top of the handle. The front and rear case halves will fall apart, and the guts will spill out all over the table. Pay attention to how the parts are positioned inside the housing, expecially the circuit boards inside the upper part of the housing, which you'll need to remove to do your work.

Use a knife or tiny screwdriver to remove the "sync" sticker from around the factory sync jack. This will expose a small nut. Unscrewing this nut will release the factory jack to the inside of the housing.

Now it's time to solder the new miniphone jack in parallel with the old sync jack. The terminals on my new jack matched those on the factory jack. I wired the tip of the new plug to the factory jack's yellow wire, and the base of the new plug to the factory jack's black wire. The clearance inside the flash housing is tighter than you might think, so the orientation at which you solder the wires to the terminals is critical during reassembly. You should match the configuration shown in the "assembled" photo at right, not that shown in the "unassembled" photo at left. I had to remove and resolder these terminals several times before I had the proper clearance to slide the adjacent circuit boards back into place. Now is a good time to test your new jack with an ohmmeter to ensure that you've got connectivity from a miniphone cable to the terminals of your old sync jack.

Reassembly wasn't as straightforward as I'd have liked. There are some slots into which the circuit boards must slide, and they don't like to stay there until the case halves are nearly closed. Be sure that your new wires aren't catching on any circuit board components during reassembly. Don't forget to replace the stickers over your factory sync port and the bottom of the handle. 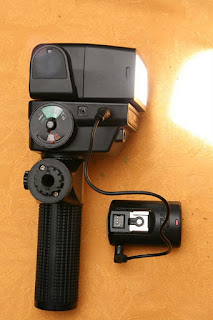 This new sync port has been far more reliable than the factory original.  In fact, I haven't had a single problem in the year since I made the switch.  I've performed this mod to a few other speedlights as well, and I'll be posting those instructions as time permits.  Until then, I'd love to hear of any similar mods that other people have performed.  If you've done anything like this  or have any other questions, please speak up in the comments section below.

This article was originally written for Jedi.com in November 2010.  If you can't get enough flash mods, read this earlier article about increasing the head rotation on a Canon 430EX.
Posted by Obi-Wan at 8:00 PM