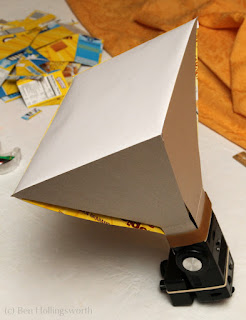 I've wanted a LumiQuest SBIII soft box for a while now.  The SBIII is a great size for close-in work.  It's about as large as you can get and still use it with the speedlight flash mounted on your camera's hot shoe.  It's big enough to soften the light for tight portraits or product shots.  It collapses down small enough to fit into large camera bags or laptop bags.  It also only costs about $40 online.  Alas, it costs considerably more at our only local camera shop.  When I found myself needing a softbox just like that on short notice, I decided to make my own for a few pennies.  Here's how I did it.

First, the quick rundown (details will follow inline with the photos):  The front face of the softbox is an 8.5x11" (nearly A4) sheet of inkjet printer paper.  The sides are made from two cardboard cereal boxes.  The interior of those sides is lined with aluminum foil for maximum efficiency and an even light spread.  The box is secured around the flash head with a large rubber band, which I've had on hand for a while and use to secure all manner of lighting modifiers. 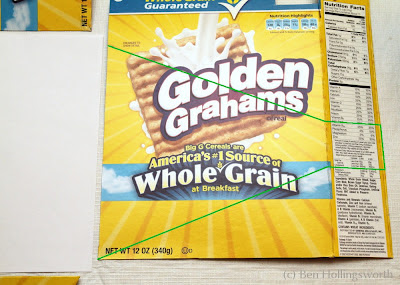 Each triangular side piece is cut from the large face of a cereal box.  The short side of the box makes up the hinged mounting flange by which the softbox is secured to the flash head.  Make sure that the flange is perfectly centered along the base where the paper gets attached.  Note that when two adjacent side pieces line up in their mounted position, the seam between them needs to be the same length, which means the straight-line distance from the front paper to the mounting flange will be slightly different.  More on this later. 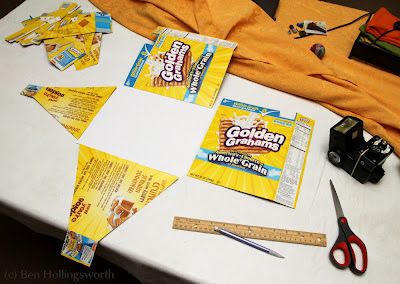 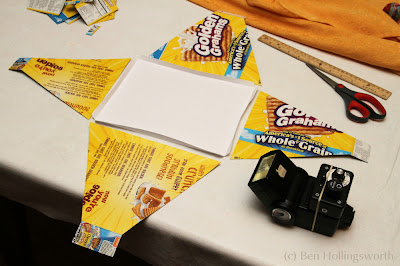 Above are the side pieces cut to size.  The base of the triangular sides is about 1" narrower than the paper's edge length, which allows me to fold the paper up to produce a nice seam.  Shown is my Vivitar 283 flash, whose head is only a tiny bit larger than my Canon Speedlite 430EX.  If you have multiple flashes, you'll want the mounting flanges that mate to your flash to be sized for the smallest flash you own.  If the flanges are too wide for your flash head, the softbox won't fit tight and stay in place. 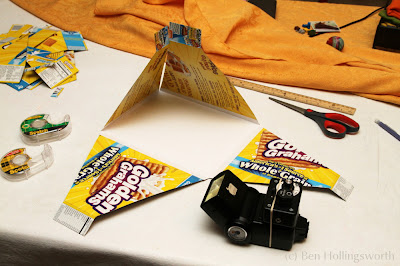 Above, all four sides have been secured to the paper diffusion surface using double-sided tape and reinforced with single-sided, transparent tape.  Two of the sides are shown in their final, "mounted" position.  Make sure that the outside surface of the cereal box is on the inside of the soft box.  It'll get covered up with reflective foil later, and the un-printed outer surface will be look better both before and after you paint it black. 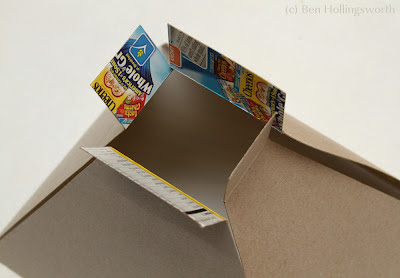 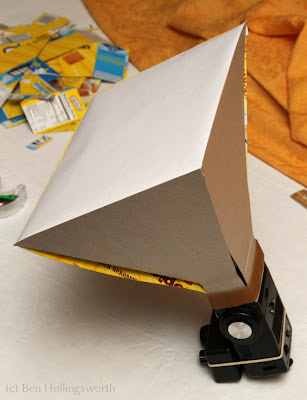 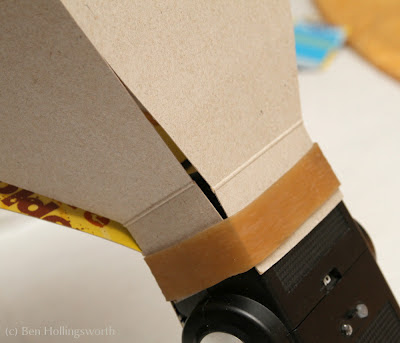 The first test fit on the flash head.  The large rubber band actually came from a woodworking store in a package labeled "rubber band clamps."  Oops!  You'll see in that last photo what I meant earlier about the seam between the sides needing to be the same length all around.  Since the front diffusion surface is wider than it is tall, the triangular sides attached to the paper's short edges need to be longer than those attached to the paper's long edges.  If you make all four sides the same length, as I initially did, they won't match up at the flash head.  I fixed this by creating a second hinge crease about 3/16" (5mm) up from the one that came from the cereal box.  It would have been better to simply cut the long-side cardboard to a slightly shorter length from the get-go, but I had already tapped the cardboard to the paper when I discovered this problem. 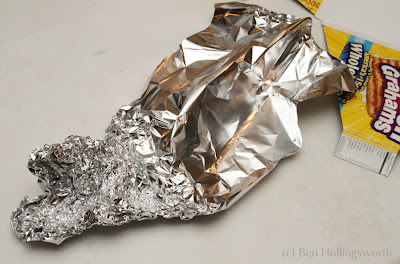 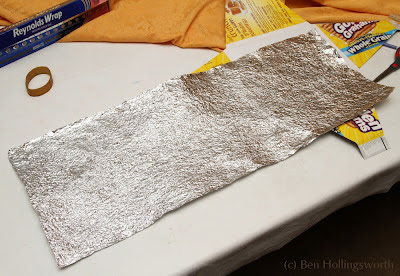 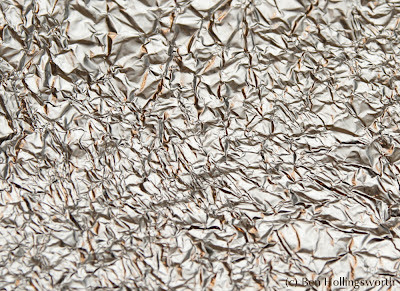 Of course, the yellow "Golden Grahams" box is neither color-neutral nor an efficient light reflector for the inside of your soft box.  I covered the inside surfaces with crumpled-up aluminum foil (Reynolds Wrap).  Carefully crumple the foil up and then straighten it out again.  This crumpled surface will throw light lots of different directions rather than acting as a simple mirror.  This results in a more even spread of light out the front of the box. 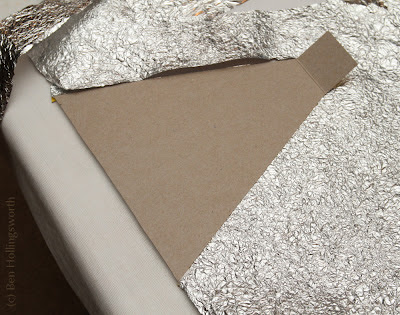 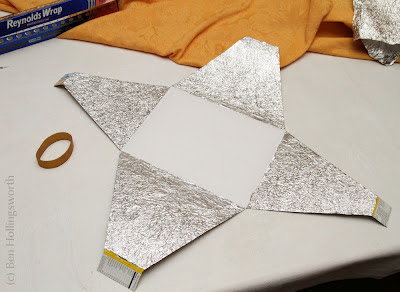 Run some double-sided tape along the perimeter of your cardboard side pieces, then lay them down against the matte surface of your aluminum foil.  Spray adhesive would probably work even better if you've got some handy and can keep it off your front paper.  You want the shiny surface of the foil to face the interior of your box.  With the cardboard and foil secured, cut the foil to match the cardboard.  Don't bother putting foil on the mounting flange near the flash head.  The bare cardboard is more durable and provides slightly better friction for a more secure fit. 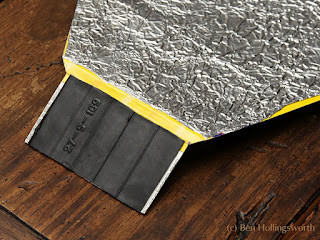 After a bit of use, I found that the cardboard flaps didn't grip my flash head very well and tended to slip around, even when held in place by a rubber band.  To remedy this, I cut some sections of rubber from an old, flat bicycle inner tube, washed them thoroughly, and glued them to the inside surface of each flap.  The rubber provides a much better grip and holds the box in place on the flash quite nicely. 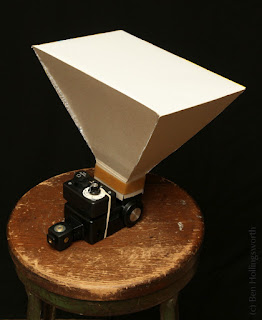 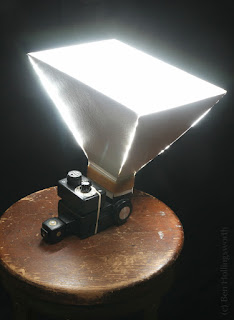 Above, you see the softbox in its first test run.  Obviously, the seams between the cardboard sides don't match up well unless the cardboard is perfectly flat.  I'll need to find some simple, inexpensive method of sealing those seams while still allowing the box to fold down flat for storage.  Perhaps a little velcro flap right at the middle of each seam. 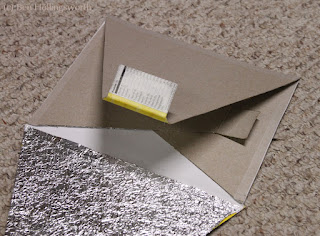 Above is the box folded for storage. It folds up nicely, although it doesn't lay completely flat all by itself thanks to the tape which stiffens up the seams.

Above are examples of my 430EX held about 3 feet from a wall.  You can see how much softer the light is through this softbox.  The box appears to suck about 2.5 stops of light compared to a bare flash zoomed to 24mm. 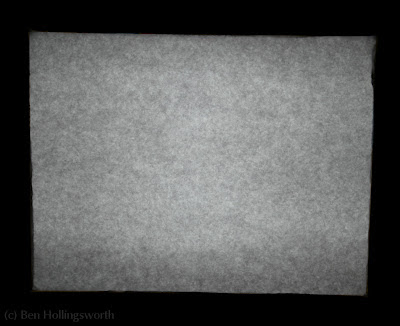 Above is a shot of the front diffusion surface at very low power.  You can see that even though the flash is pointed directly at the paper (with the flash zoomed to its widest beam), there's a very even spread of light across the entire surface, with only slight vignetting in the corners.  The crumpled foil does a great job of spreading the light around.


Above are example shots taken with a bare flash (left) and the soft box (right).  The shots of my son had the flash out to camera left about 3 feet from his face.  The shots of the car had the box about 4" directly overhead.  I can't wait to use this thing for small product shots!

So that's where I am right now.  I plan to spray paint the outside of the cardboard black and then find some method of sealing the seams while in use.  I've already used this soft box in its current form for one professional shoot, and it worked quite well as a hair light.  The softer light source worked much better than the bare flash head that I used to use.

I also plan to create some sort of a grid for the front of this to help contain the spread of light onto nearby surfaces.  I have an idea, but I'm open to suggestions how how best to do this on an extremely limited budget.

My biggest concern about this design is the durability of the paper diffusion surface.  If you're not careful when mounting the softbox to your flash head, you could rip the corner of the paper.  A little more transparent Scotch tape along the joints between the front & sides might do the trick.

I intentionally wanted to post this preliminary report so you can see my thought process and how the idea progressed.  I'm also open to ideas on how to improve the design without spending undue amounts of time or money.  $40 for a LumiQuest Softbox III isn't a huge sum, so unless you're on a super tight budget or you're really crunched for time (like I was), it's probably not worth making your own.  In fact, Fotodiox sells a similar model for only $14.  Still, I'm happy with the results, and I'll continue to use this until I have a compelling reason to upgrade.

As always, if you've got any questions or suggestions, please speak up in the comments below.
Posted by Obi-Wan at 8:00 PM