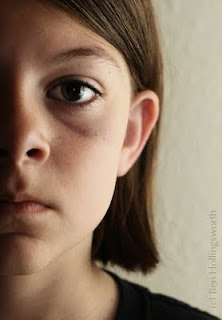 Tiny Hands International is an organization based in Lincoln, Nebraska, which works to rescue young women and girls from the sex trafficking industry in Asia.  These girls are led from their homes in Nepal and surrounding countries with the promise of a new life and high paying job that will help pull their families from their poverty-stricken lives.  Instead, they are sold into slavery at brothels in India.  The promise of hope turns into a nightmare more horrible than most of us can imagine.

Stop and think about that for a minute.

Any of you readers have daughters?  That's mine pictured above, after what I pray will be the worst injury she ever endures.

I'm proud to be connected to several of the leaders of Tiny Hands through a variety of different channels.  When they called me up last year to photograph their second annual fund-raising golf tournament, I was more than happy to donate my time.  I photograph a lot of charity events, and sometimes my family wonders whether the time I'm putting into those is really worth it.  For Tiny Hands, a measly 40 hours of my time hardly seems like enough.

This past weekend, I got to shoot their third annual Brenden Stai Golf Classic, which takes place each year at Lincoln's HiMark Golf Course.  Brenden is a local celebrity who won a national championship on the Husker football team and went on to a lengthy NFL career.  He brings in lots of other sports figures to make the golf outing fun for everybody.  A silent auction and dinner was held on Friday night, followed by the golf tournament on Saturday.  This year, they were blessed with a better turnout than expected to hear new Husker baseball coach Darin Erstad speak.  Tiny Hands raised over $70K this weekend.

The golf tournament itself was a lot of fun.  The rain missed us, and we had a warm, sunny day on the course.  The highlight of the day was when James Lamb sank a hole in one to win a new Honda Accord from Williamson Honda.  James then donated the car back to Tiny Hands, because he believes in their mission that much.

I spent most of the tournament following Brenden around and taking photos of him and the other celebs with each of the foursomes.  These photos will be signed and distributed to each of the participants as a thank-you gift.  That job does reduce the number of action shots I'm able to get, but it didn't keep me from almost getting pelted by former NU offensive lineman DJ Jones, who shanked a shot right at the golf cart behind which I was hiding.  DJ takes the top spot for the closest I've ever come to getting hit while photographing golf.

If you're looking for a good time while supporting a good cause, look no further than next year's event.

The entire collection of photos is online at the Prairie Rim Images gallery.  I've posted a few photos below to give you a feel for the event.  First, from the dinner and auction Friday evening:


And now from the golf classic on Saturday:


This is the second charity golf tournament I've photographed in as many months. Read about the 2011 Cross Pointe Golf Outing here.
Posted by Obi-Wan at 12:37 PM