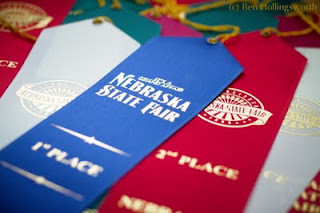 The last few years, my daughter and I have taken part in the photography competitions at the Nebraska State Fair.  For those of you amateur photographers whom have never taken part in such a contest, I highly recommend it.  It's a fun experience, especially if you don't have much experience printing and displaying your images.

With the Nebraska State Fair moving from our home in Lincoln out to Grand Island (beyond where we were willing to drive to see our photos displayed), we opted this year to enter our photos in the Lancaster County Fair instead.  As our county fair is run by the same lady that oversees the state fair, the rules are similar.  However, it's a smaller operation (about 600 entries, compared to 2000 in the state fair).  Entries are divided into a few dozen topical categories, including several for kids 10 and under and several more for kids 11-17 years old.

Preparation isn't difficult.  Most classes require photos with minimal postprocessing, printed at approximately 8x10" and mounted on 11x14" foam core.  They get judged anonymously before the fair starts, and then displayed for several days during the fair.

It's fun to hear from friends who have seen your photos on display, and it's even more fun if something wins a ribbon.  The hard part can be remembering that the judging is merely the opinion of three individuals, so you shouldn't take it personally if a really lame (in your opinion) photo gets a ribbon while your awesome shot doesn't.  Just have fun with it and enjoy the experience.

The past two years, I've submitted about 15-20 photos each year, of which about half have won a ribbon of some sort.  The following won first place in their class:


My daughter Noelle (7 & 8 years old at the time) has won third place ribbons in the youth division for these three photos:

Prepping 20 photos is more work than you'd expect, so we're scaling back this year and only submitting the following five shots between us:

It's interesting to note that 6 of the 12 photos on this page (the title shot, two of the blue ribbon shots, and three of this year's submissions) were taken with old, manual focus lenses.

The Lancaster County Fair runs 4-13 August 2011, with the photography entries on display from 9-14 August.  You've still got until 10 August to enter the Nebraska State Fair if you'd prefer.

In case you can't tell, I've been crazy busy the last few weeks, and haven't had time to put together properly illustrated blog entries.  This post is mostly just a stop gap so you know I'm not dead.  I'm terribly sorry for that (being busy, not being alive), and hope to remedy the situation soon.
Posted by Obi-Wan at 1:26 PM