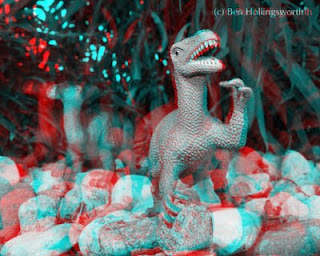 This changes everything.  Well, it might.  Or maybe not.  It could just turn out to be a lot of unsubstantiated marketing hype.  New Silicon Valley startup company Lytro announced recently that it will soon be marketing its new light field cameras to the consumer mass market.  I dropped back into my grad student mode to do some digging into this technology, and I'll give my opinions below.

A "light field," or "plenoptic," camera differs from a traditional camera in that rather than capturing a single 2D image, it uses a second array of tiny "microlenses" right in front of the sensor to capture information about the direction the light was traveling at a given point in the image.  Software can use this information to build a number of different 2D images, including images that were focused at different distances, captured at different apertures, or even captured from slightly different locations (within the bounds of the front lens element).  That last item means that you can generate stereoscopic 3D images from a single plenoptic capture.  Yeah, that's cool.

Of course, it's that first item -- the ability to refocus an image after the fact -- that's generating all the press and causing Lytro's new camera to be promoted as making "living" images.  Indeed, Lytro founder Ren Ng writes in his PhD dissertation,


"I love photography, but I am not a great photographer.  The research in this dissertation grew out of my frustration at losing many shots to mis-focus."

Viewing these living images requires a special applet plugin for your preferred viewing platform.  In the demos on Lytro's site, you simply click your mouse on a part of the image, and 2D image on your screen regenerates to put your selected item in focus.  I admit, it's a lot more fun to play with these than to look at still images, and it's a lot more forgiving of photographers or cameras that can't focus properly.

Another advantage to light field cameras is considerably lower noise and low light capability than today's 2D cameras, which means flashes could be come a thing of the past on low end cameras.  Focus and aperture controls are no longer necessary, because both can be determined in software after the fact.

Plenoptic cameras have been available since the mid-1990's for research purposes, but they were far too cumbersome for consumer use.  Lytro has changed that by packaging their technology into a camera fit for consumer use.  Early prototypes used a medium format body with a digital back, which is only slightly larger than a pro-sumer DSLR.  Lytro won't commit to pricing yet, except that it will be somewhere between $1000 and $10,000, which puts it in the range of mid- to high-end DSLR's.  They're scheduled to be available to the public in late 2011.

There's always a catch, right?  Of course there is.  From what I've read, the catch here seems to be low resolution.  In order to capture the direction of light at each pixel, a plenoptic camera uses several adjacent photosites to record the amount of light that passes through different parts of each microlens.  Each microlens and its associated photosites renders a single pixel in the resulting 2D image.  The more photosites you use for each pixel, the more you're able to adjust focus and shift the apparent viewpoint, but the lower your final image resolution will be.  Increasing the image resolution means decreasing your readjustment flexibility.

The solution to this seems to be to simply increase the number of photosites on your sensor.  After all, that's what camera manufacturers have been doing like crazy since the late 1990's, right?  Shouldn't it only be a matter of time before the Lytro camera of tomorrow can produce images with the resolution of today's 2D cameras?  Well, no.

The problem comes from the wave nature of light, which limits the useful size of a single photosite.  When light passes by a hard edge, like the edge of a lens aperture, it is diffracted and blurred.  The smaller the aperture through which light passes, the more blurry the projected image becomes.  The minimum size of a distinguishable spot of light is known as a "circle of confusion."  As long as each photosite is larger than your circle of confusion, you're golden.  When the photosite becomes smaller than the circle of confusion, all you get is multiple photosites recording the exact same intensity, which does you no good.  In today's DSLR's, the effects of diffraction aren't apparent until about f/11 or f/16.  As sensors acquire more photosites, that aperture number gradually will decrease to f/8 and lower.

This sounds like a lot of doom & gloom, but remember that I'm a professional still photographer to whom sharpness of large prints is important.  The vast majority of consumers will never need more than 1600 pixels across an image, because all they do with images is post them on social media sites and use them for desktop wallpaper.  For them, the size limitations of a light field camera aren't a problem -- but will the price be prohibitive?  Movie producers will probably love it, too, because large, expensive cameras are standard fare in that industry.  I just don't see print-making professionals lining up to get on board.

All of this will get sorted out later this year when the first production models start making their way to reviewers.  Until then, let the conjecture commence.

Here's a few related links in case you want to do your own digging on Lytro or light field cameras:

News flash: Lytro revealed their first commercial product to the world on 19 October 2011. Read what I had to say about that release.

Got a comment, question, or new bit of related news?  Speak up in the comment section below.  I'd love to hear from you!