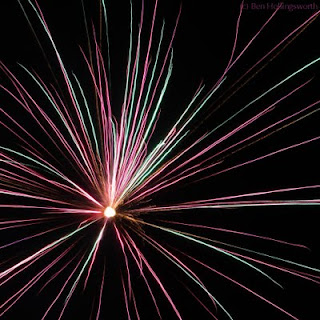 With the USA's Independence Day (July 4th) falling on a Monday and creating a three day weekend, I was afforded the unusual circumstance this year of photographing fireworks on three consecutive days.  Generally, I get one -- maybe two -- chances to shoot fireworks per year.  If I wish I'd done something differently, I have to wait an entire year to try it again.  Getting three chances in rapid succession was kind of fun.

This year, our city's large show at Oak Lake was Saturday evening, followed by a smaller (but much more accessible) show at a nearby lake on Sunday, and finally a neighborhood party with friends on Monday.  I chose to take different approaches to photographing each of these events.

The last time I attended the Oak Lake show, I got a great spot right on the water's edge, and the still water provided some incredible reflections.  This year, the water was more turbulent, and I was forced to sit behind another row of people, so the reflections I wanted just didn't pan out.  A cloud bank moved in just before the show, which blacked out the sky and removed any nice, blue background I might have otherwise had.  I used a wide-ish angle lens to capture the entire scene.  I set the aperture to f/11 for good color saturation and sharpness.  The white balance was set to tungsten for a rich, blue sky (before the clouds moved in).  Shutter was set on "bulb" so I could control the duration with each shot.  Most exposures were about 5-10 seconds long.  I still got some decent shots, but nothing to write home about.  I'm not a big fan of the Oak Lake show, because they fire shells as fast as they can into the same air space, rather than spreading them out throughout the skyline.  Photographically, all the bursts get layered right on top of each other.  Saturday's shots are below (some of them cropped significantly), followed by more text.


Although Sunday's show wasn't as large, we were able to sit nearly right under the fireworks.  We even got showered in debris a couple times.  This time, I used a relatively narrow telephoto lens.  At such close range, my 50mm Super-Takumar got some nice, tight compositions in the middle of the bursts, which is what I wanted.  Gotta love old, manual glass.  Of course, not every burst was at the same height, so I was constantly re-aiming the tripod, sometimes even while the shell was ascending.  I mis-aimed plenty of shots, but I still got a few real keepers.  I was happier with these shots than I was with Saturday's.  As before, I set things at f/11, tungsten, and bulb, although most exposures were short to include just a single burst.  All of these shots are the full, uncropped, original width.  More text following Sunday's photos.


For our neighborhood party on Monday, I wanted to concentrate on the party rather than the fireworks.  I used my 10mm lens and setup my tripod behind the row of chairs on the driveway.  Every shot was on tungsten, but I varied my aperture & exposure length to record the color in the sky.  Some of the neighbor girls took a liking to my camera, so I eventually just locked the exposure at 15 seconds and told them which button to press to start recording.  They actually captured the final two shots below.  They had great fun, and I got to take a break without missing any shots.  Assistants are great.


So there you have it.  Three different philosophies for photographing Fourth of July festivities.  For general pointers on photographing fireworks, checkout this earlier post.  Hope those of you in the US had a safe & happy holiday.  My son got hit in the leg by one projectile that went horizontal on us, but it was a minor injury.

Got a question or a suggestion of your own?  Speak up in the comment section below.  I'd love to hear from you!
Posted by Obi-Wan at 10:45 PM