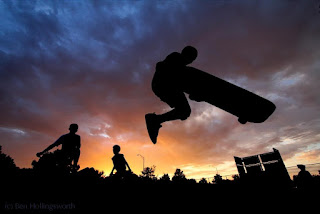 I had the privilege recently of hanging out with my family, our neighbor kids, and a bunch of strangers at a local public skateboard park.  My oldest son was the impetus for the outing.  He's no Tony Hawk, but he enjoys playing with his skateboard, his BMX bike, and especially his brand new Rip Stick.  As I do with most family park outings, I took my camera bag just in case.  There was a large crowd at the skate park that evening, and we were blessed with a gorgeous sunset that provided some excellent photo ops.  All of the kids were happy to perform for my camera after they saw the type of shots I was getting, and I handed out several business cards so I could share the images with them.  I figured I'd share with you a few of the techniques that I used that day to capture the action.

I filled my camera bag that night with the following gear:

The 7D is my primary body, and its 8 frames per second shutter rate works better for sports than my 50D's 6.3 fps.  I usually take an older, manual lens when I'm just screwing around at the park, but the 70-200 is still pretty new, and I wanted to get a feel for using it.   The 10-22 is a given; it's one of my favorite lenses, and I rarely leave home without it.  I love the dramatic perspective it gives at 10mm, while the 22mm end is just long enough to give a somewhat normal angle of view.  The 430EX is my only TTL flash, although that didn't matter, because I only used it in manual mode that evening since that's all the V4 triggers can handle.

I took the wireless radio triggers because I figured if I used my flash, it would be off-camera to get some dramatic lighting on the skaters.  While that did happen, it turned out that the flash still never left my hand.  In retrospect, I should have taken my 36" coiled flash cord, which would have allowed me to shoot the flash in TTL mode, use the high-speed sync for faster shutter speeds, and use second curtain shutter.  The high-speed sync would have been especially useful, because it would have allowed me to use faster shutter speeds than the normal 1/250s sync speed, which would in turn freeze the action better and create fewer unlit, blurred edges along my subjects.

I started out the evening (with good daylight and a mostly cloudy sky) using my 70-200mm lens to get close-up detail shots of the kids at play. However, since none of the kids were exactly Olympic-quality skaters, I quickly switched to the 10-22mm lens in order to add some drama to the photos with the ultra-wide angle of view. A wide lens requires you to get in close to your subject, which can be difficult with athletes, but wasn't really a challenge with these elementary-aged skaters. The trick was knowing ahead of time what route they were going to take so I could stay just outside their path. I didn't want to get hit by them any more than they wanted me to interfere with their landings.

The cloudy sky had lots of texture, and I wanted to use it as a dramatic background to my photos. I did this by dropping the exposure on the camera dark enough to get some texture in the sky. This made the skaters too dark, so I dug out the flash and triggers to add some dramatic light to the athletes in the foreground. Under normal conditions, the flash won't sync at a shutter speed beyond 1/250s without leaving part of the frame dark. I therefore set my shutter speed at 1/250s and then adjusted the aperture and ISO to make the sky look good. With the ambient light dialed in, I turned on my flash and set the flash power to get well-lit athletes at my desired working distance of about four feet.

It's important to remember when shooting fast-moving subjects that the lower your flash power is, the shorter your flash pulse will be. When you're using the flash to freeze the action, you want the shortest pulse possible. Sometimes this means sacrificing ISO noise or depth of field in order to get the pulse short enough.

As the daylight slowly disappeared, I had to readjust my ISO and flash power every few minutes to keep the right exposure on both the sky and the skaters.

I moved around to various spots in the park in order to catch the best angles as the kids played.  With the 10mm lens, I tried to get either very high or very low angles.  I often sat just off to the side of the top of a ramp, with my flash held just 12-16" off to one side.  I held the flash at the same level as the ramps, but angled it upward to light the skaters without spilling much light onto the ground or ramp.

The textured clouds looked cool enough before sunset, but the highlight of the day came when the sun dipped down near the horizon and peeked out through a crack in the clouds. This lit the underside of the clouds up in an explosion of pink, orange, red, and purple. I was so excited that I nearly wet myself.

I immediately put away the flash and started shooting the skaters as silhouettes against the vibrant sky. This is when I got the best shots of the evening.

Since I didn't have the flash to freeze the action, I used a fast shutter speed, starting around 1/1500s and working my way down to 1/750s (with my ISO going up from 400 to 1600) as my light disappeared.  I set my aperture as wide as it would go: f/3.5.  At 10mm, even a wide aperture gives a decent depth of field.  Just as I had done with the flash, I set the exposure to make the sky look great.  This made the skaters dark, but not black.  I had to finish the job with a curves adjustment in post on some images.

I set the camera to the 8fps rapid fire mode and just held the shutter down for 3-5 consecutive shots during each jump.  I kept the camera position low (often lying on the ground) in order to center the skaters against the brightest, most colorful part of the sky.  Camera position makes all the difference.

One of the highlights of the evening came as the best color was waning.  A teenager showed up and started getting some massive air off one of the jumps.  I was able to catch two of his jumps before the crowd of little kids made him too nervous. 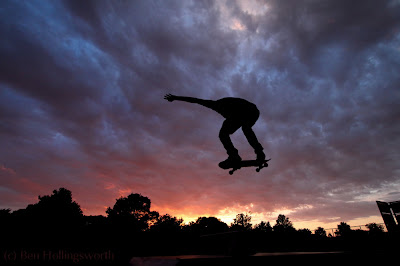 You can see the whole gallery of photos from the evening in the Prairie Rim Images gallery.  Hopefully this inspires some of you to grab the camera and get some creative shots the next time you see some action under a great sunset.  As always, if you've got any questions or suggestions, or even if you want to show off your own images of sports at sunset, please speak up in the comments below.

[Update:  Two days after I took these photos, I submitted one of them to our county fair photo competition, where it one first place in the "sunset" division.]
Posted by Obi-Wan at 8:00 PM