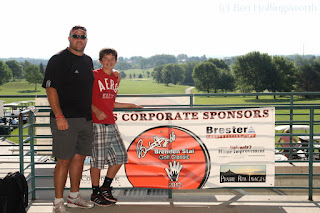 Every year, Husker football celebrity Brenden Stai sponsors a golf tournament in Lincoln to raise money for Tiny Hands International.  A handful of other Husker celebs partner up with each foursome on the course, and a dinner & silent auction take place the preceding evening.  This summer marked the fourth year of the tournament, and the third year that I've been its official photographer.

Tiny Hands works primarily to prevent sex trafficking in Nepal and India.  The stories that their intercepted girls tell are quite moving, especially to someone like me who has a daughter of that age.  This is one charity event to which I'm very happy to lend my services each year.  It doesn't hurt that I'm also long-time friends with many of the organizers of the event.

My primary purpose at the Brenden Stai Golf Classic is to take group photos of each foursome along with Brenden.  Brenden signs the photos before they're handed out to the foursomes.  It's just a little perk to make the event more fun for the golfers.  It's also always entertaining for me to spend the day hanging out with Brenden.  This year, we were joined by his son, whom I originally met when I led the Cub Scout den that he and my own son were in years ago. 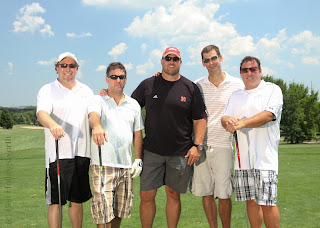 Of course, getting good group photos isn't as easy as just swinging around a point & shoot and saying, "Cheese."  The light changes as the sun moves through the four+ hours of golfing.  My goal is to get well-lit faces with a properly exposed backgrounds without blinding the golfers in the process.

To do this, I position the golfers in front of a pretty backdrop (preferably one without buildings) with their backs to the sun.  I then use a flash or two to light their faces, which would otherwise been in deep shade. 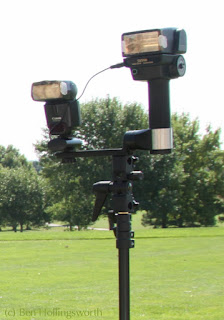 Matching the bright, mid-day sun requires a lot of flash power.  Rather than setting my biggest speedlight at full power, I use a pair of them at half power.  This cuts the refresh time and also doubles the number of pops that I'll get without swapping batteries.  I typically put the flashes on a single stand about 20 degrees off axis on the side opposite the sun.  The flashes are set at about chest height in order to get in underneath the ubiquitous hat brims.  I don't use an umbrella, because I need all the power I can get.  A 1/4 CTO gel on each flash warms up what would otherwise be a harsh light.

The hard thing to remember when shooting in bright daylight is that you can't trust your LCD to show accurate color.  You need to use your histogram to make sure your exposure isn't blowing out highlights.

I didn't do much for action shots this year, because we were positioned at a tee box right next to the clubhouse.  Most of what I shot was with my Canon 10-22mm lens.  I started out sitting off to one side, slightly forward of each golfer, as he teed off.  The sun was at my back, and nicely lit the right-handed golfers as they took care of business.

When a lefty teed up, I decided to take a break rather than switching sides and shooting directly into the sun (without a flash).  That was the best decision I made all day, as this guy shanked his shot about 80 degrees off to the side.  It travelled over 100 feet, never getting more than 4 feet off the ground.  If I had been sitting in my normal position, that shot would have gone right through my head.  I've had some close calls with golf balls (including this shot at right from the previous year's tournament), but this is the first one that's really gotten my attention.  From then on, I made sure I sat behind the ball.

The dinner and silent auction also marked the first time I'd gotten to use my new Canon 70-200/2.8 IS lens at a dark, indoor event.  The image stabilization and quick, accurate focusing made my postprocessing work much easier.  I did find that the lens flares badly when shooting a dark subject into a brightly lit background like a window.  Unfortunately, every wall of this venue was mostly windows, so I had to choose my shots carefully until the sun went down.

All in all, it was a fun event (as always).  Tiny Hands raised about $75,000 that weekend, which will fund the rescue of about 1500 girls.  If you're looking for an opportunity to swing a club and rub elbows with Husker football players for a good cause, look no farther than this annual tournament.  For more info on next year's tournament, check out their web site.

If you want to see all the photos from this weekend, check out the Prairie Rim Images gallery.  You can read about the 2011 tournament in an earlier post.  And of course, if you have any questions, comments, or suggestions, please speak up in the comments below.
Posted by Obi-Wan at 8:00 PM