Why I prefer CompactFlash cards 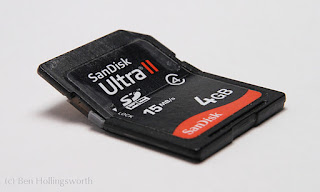 The card reader in my computer has had trouble lately reading the SecureDigital card from our P&S camera unless the card was seated very securely in the slot. I've gotten in the habit of giving it a firm press when inserting it. A few nights ago, I guess I must have been pushing in at a slight angle, because I heard a crunch as I taco'd my SD card. I apparently seated it sufficiently, because despite the damage, I was still able to pull all the data off the card. This is not the first time I've heard of the data on SanDisk cards surviving catastrophic physical damage.

This is why professional grade cameras use beefy CompactFlash cards instead of pansy SDHC cards.  CF cards are far easier to handle safely. This is also why I only buy cards made by respected manufacturers (SanDisk, Lexar, and Kingston). I've had no-name cards lose data just sitting on a shelf.

This experience got me thinking about the various card options, their history, and the technology behind them.  Here's a summary of what I've found.

Secure Digital, with variants known as SD, SDHC, and SDXC, was created in 2000 by SanDisk, Toshiba, and Matsushita.  The original, full-size version is commonly used in consumer-grade digital camera, with smaller miniSD and even smaller microSD cards commonly used in cell phones.  The latter two are able to slide into SD-shaped adapters for use in more standard SD card readers.  The initial spec for all three physical enclosures limited capacity to 4GB.  The SDHC enhancement increased that to 32GB, and SDXC increased the size limit to a staggering 2TB.  Alas, the maximum theoretical transfer rate is 104 MB/s.  Speeds are typically advertised as a multiplier of the original audio CD transfer speed of 150 KB/s.  For example, a 400x transfer speed would be 60 MB/s.  At this writing, the largest SD card is Lexar's 128GB model.  The fastest is SanDisk's Extreme Pro 64GB card, clocked at 95 MB/s (633x).  Each retails for about $200.

Created in 1994 by SanDisk, the CompactFlash format is the grand-daddy of current flash cards.  Two form factors are commonly used:  Type I and Type II.  Type I is the more common, thinner (3.3mm) size which describes most memory cards.  Type II is thicker (5mm) and typically used by microdrives (miniature, spinning hard drives in a CF form factor).  Physically, CF cards are not quite twice as large as SD cards.  Relative speeds are represented using the same metric as SD cards (1x = 150 KB/s).  The CF specification supports a maximum capacity of 128 GB on a single card -- a limit which has already been reached by commercially available cards.  At this writing, the SanDisk Extreme Pro 128GB CF card has a 100 MB/s transfer rate and costs a mere $900. 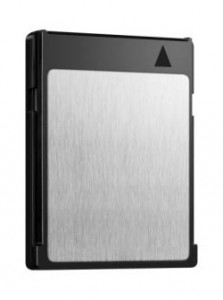 The CompactFlash Association announced in early December a new flash memory card format, dubbed XQD.  It's based on PCIExpress, which has considerable speed advantages over the ancient PCMCIA protocol on which CompactFlash is based.  Physically, it's about 3/4 the size of a CF card, but still larger and thicker (thank goodness) than an SD card.  Introductory implementations should be capable of 125 MB/s transfer speeds, which is comparable to the most expensive CF cards available today.  Improvements to the PCIExpress standard (already on the horizon) should increase that speed four-fold.  This will be a boon for high volume producers like full frame DSLR's and HD video cameras.  The XQD card will be officially unveiled in Japan next February (2012), and I'm guessing you'll start seeing pro-grade DSLR's sporting the card a couple years after that, with the format working its way into lower cost cameras as the years progress.  CompactFlash isn't quite dead yet.  Read more about the XQD announcement here.

Generally, capacities of commonly available CF cards have been roughly twice as large as those of SD cards.  I assume that's due to the lack of market need for such large SD cards.  However, SD cards are starting to creep their way up higher into the product lines of digital camera.  They were first introduced in the point-and-shoot market due to their small size.  As their popularity increased with consumers, low-end DSLR's started using SD cards in order to entice P&S users to upgrade cameras without replacing their memory cards.  Canon's 60D and Nikon's D7000 -- another rung higher on the ladder -- now use SD cards as well.  With the introduction of the XQD spec, it remains to be seen whether SD cards will make their way any higher up in the product lines of camera manufacturers.  Time will tell.

If you're curious about my opinions on repeatedly reformatting flash cards, read this post.

What's your favorite format of memory card, and why?  Speak up in the comments below.
Posted by Obi-Wan at 6:00 PM