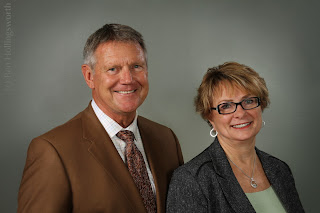 I had the opportunity recently to shoot some portraits of couples for a local charity.  While it's always preferred to get the best shot possible in camera, sometimes that just isn't possible for a variety of reasons.  Even when it is, portraits often require some additional postprocessing to clean up various stray hairs and skin blemishes.  I'm fairly new to portrait work, and don't intend to do a great deal of it, but I wanted to share some of the steps that I took to process the photos from this gig.

This is the second time I've shot these annual portraits for this charity.  I learned a lot the first time through, and this second round turned out much better in camera.  I used better lighting, and I was able to plan ahead when shooting to help make the required postprocessing go more smoothly. 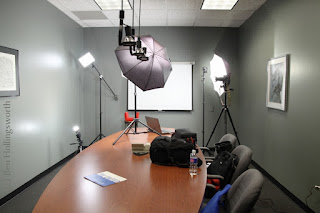 I was shooting in a conference room, which was the largest available space in their office.  I used a fairly standard 4-light setup:
There were two main differences between this and last year's setup.  First, the fill light got much closer to the camera axis in order to fill in shadows in the eye sockets.  Second, the hair light now used the soft box instead of a grid spot.  I'd still love to have had a grid on that soft box, but oh well.

This wouldn't have been so bad if the room was empty, but the large, immobile conference table created some obstacles.  Most significantly, I had to place my subjects much closer to the background than I would have liked.  Because of this, I didn't have room to setup my own backdrop, and instead used the room's olive-colored painted wall as my background.  It's a decent color, but it's also somewhat reflective, which created some hot spots when my key, fill & hair lights bounced off it.

On the subject of light reflections, I also had several instances where a great-looking pose had reflections in the eyeglasses from my fill light.  I tried reorienting the fill for certain poses, but sometimes I just couldn't manage to misalign it & my subject's eyeglasses.

Another issue is common to many multiple-subject portraits, and not specific to this job.  Namely, it's always difficult to get everybody looking their best in a single shot.  In three separate instances, I couldn't get a single shot in which both the husband & wife looked great, but I did get several photos in which one or the other looked great.  Thanks to the wonders of digital photography, I was able to combine these images into one by cutting & pasting a head during post.  When the shooting conditions are controlled, that's a lot easier than it first sounds.

The final big cause of postprocessing is basic vanity.  Whether they voice this or not, people like to look their best in a portrait, and that means cleaning up little things like stray hairs, zits, wrinkles, and dandruff.  Cleaning this stuff up--at least to a basic, less-noticeable degree--is actually pretty straightforward.  While none of the subjects requested it, this step really does make the portrait more pleasing.

Here's a little more detail on how I did it.  Most people call these techniques "photoshopping" after Adobe's industry-leading software package.  There are actually several programs that will do this type of editing, and many of them cost considerably less.  The GNU Image Manipulation Program ("The GIMP") is a free program that handles most image processing tasks quite nicely.  It's available for Windows, MacOS, and Linux, which is handy for a Linux guy like me.  There are numerous good books available on The GIMP, so if you want to get up to speed quickly, please check those out.

Last year, the reflections off the background wall gave me fits.  The best I could do was to define polygonal areas around the hot spots and try to adjust the saturation and brightness to match the surrounding wall.  It turned out... OK.  This year, I knew that was coming, so while I was there, I shot some photos of the bare wall using only the ambient room light and my background flash.  The overhead fluorescent lamps provided a reasonably even light across the wall.  It took only a little color & curves tweaking to get these shots to match the color of my strobe-lit portraits.

Once I had a plain background, it was a simple matter to add it as a new layer in The GIMP, apply a transparent layer mask, and the paint in the layer mask wherever I wanted the "good" background to replace my reflective background.  For this painting, I used a large brush (several hundred pixels) with a soft, feathered edge.  I set the brush opacity down to 20% and gradually built up the mask's opacity until it smoothly and adequately covered any undesirable spots in the original background.  The feathered edge allowed me to get pretty close to the subjects' heads without showing any hard transitions.

Most of the time, I was able to get around reflections of my fill light in eyeglasses by having my subject turn or tilt their head.  However, in some instances, the best pose was accompanied by such a reflection.  I got around this problem using a similar technique to the one used on the background--but with less forethought.

If I'd been thinking ahead, I'd have had my eyeglass-wearing subjects remove their spectacles for one shot so that I had some good material that I could use to paste over the reflections.  As it was, I had to make do with the lowest reflection I could manage from another less-than-perfect shot.

I followed the same procedure used above for the background.  I added the clean shot as another layer, added a transparent layer mask, and then painted in the mask over the reflection to expose the unreflected eyes.  Always paint with a feathered-edge brush with a low opacity setting, since it's easier to build up more opacity than it is to remove it.  I then drug the new image around until it lined up perfectly with the old layer.

Sometimes, I didn't have a great unreflected eye to work with, so I had to paint in areas using the heal or clone tool.  This technique is discussed more under "skin blemishes" below.

I was shooting with my camera on a tripod, and I took multiple photos with the subjects in the same pose, just a minute or so apart, to get the best look.  The subjects' bodies were at the same angle in each shot, and the background was unchanged.

I painted a fully opaque layer mask over the new head that I wanted to paste into the background photo.  I used a hard-edged brush with 100% opacity for this operation, because I wanted to be sure that no part of the old photo showed through.  Once the head was exposed, I used a large, feathered brush (still at 100% opacity) to draw a feathered border around the head's mask.  This allowed the surrounding background & neck to fade from one image into the other one.

The subjects were never in exactly the same spot in both photos, so once the new head was exposed, I drug the second layer (the head layer) around until the new head lined up perfectly with the old neck.  If any of the old head was still visible, I expanded the new head's layer mask to cover up the old head.  I also cleaned up the feathered mask around the neck & collar to make sure the transition was seamless.

This actually turned out to be a rather simple operation.

The final operation was to clean up blemishes in the skin & clothes of my subjects.  Things like zits, stains, dandruff, and stray hairs got erased completely.  Other features like deep wrinkles and birthmarks got softened, but not removed.  All of my subjects were in the latter half of their lives, so completely removing wrinkles around the neck and eyes would look very unnatural.  I was fortunate that all of my subjects were pretty good looking straight out of camera, so I didn't have to do much work here.

To do this, I used the clone & healing tools in The GIMP.  There are several good tutorials on YouTube & elsewhere for using each of these tools, so I won't duplicate their content here.  Here's one good one.  I performed all of these operations in a new layer, duplicated from the original, so that I could easily turn them off & on to see my progress, or revert just part of my modifications using a layer mask.

Basically, the clone tool is used to copy one area over top of another area.  This is great for removing stains, dandruff, and stray hairs that need to disappear entirely, and are generally part of a constant background.  I typically used a feathered brush with 100% opacity to remove all of this stuff.

The healing tool still replaces its contents with a nearby area, but it does so more smoothly.  Using a healing tool with a 30% opacity is a great way to reduce the impact of wrinkles without removing them entirely.  You should always start with a low opacity and just draw over the area again if you need a stronger effect.  Removing zits and bumps always ended up with 100% opacity, for obvious reasons.

In some instances (but not the example shown here), I bleached & brightened teeth a little, too.  As with the skin, I didn't want to go crazy with the whitening.  My goal was to make it look better without making it obvious that I did anything at all.  That's really the goal of this entire process, in fact.

As before, I created a new layer in The GIMP by cloning the original layer.  In this new layer, I lowered the saturation by 30% and then brightened the whole image by about 2-3 stops.  I then created a transparent layer mask and slowly painted in the mask over the teeth using a small, feathered brush with only about 20% opacity.  I painted over the teeth several times to build up the opacity while maintaining a soft edge.  This allowed me to concentrate more on areas that needed more help.  It's a pretty quick, straightforward process.

So those are the basic techniques that I use for portrait retouching.  I think the results turned out rather well.  I'm far from an expert here, but I'd be happy to elaborate on this if any of you have any questions; just speak up in the comments below.  I'm also very eager to hear any suggestions you have for improving this process.  If you want to read more about the software I use for general postprocessing on Linux, read this post.  Once again, here is the original image followed by the final image: