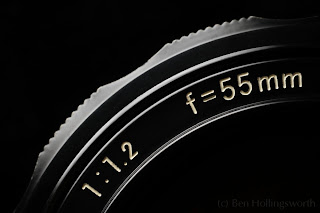 Recently, a co-worker brought me an old Nikon F3 body with a Nikkor-S.C Auto 1:1.2 f=55mm lens attached that once belonged to his father.  He knew of my weakness for old cameras and offered to sell it to me.  I declined, but I still couldn't resist putting this ultra-fast f/1.2 lens through its paces for a little while.  After a little experimentation and a little research, here's what I know about this lens.

First, some history.  Nikon introduced their 1.2/55mm lens in December 1965 as a replacement for their 5.8cm f/1.4 lens.  The original Nikkor-S version of the 55/1.2 had a simple (though not single) lens coating.  It obviously used the pre-AI mount. 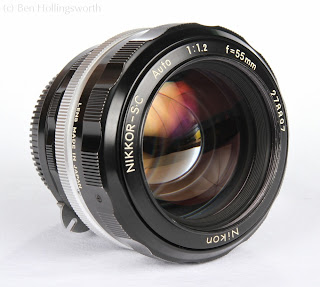 In October 1972, Nikon upgraded the coatings and renamed the lens "Nikkor-S.C" (the "C" was for "coating").  The lens I got was built near January 1974, making it only a few years younger than I am. 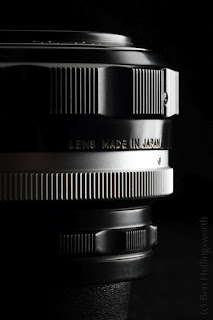 Approximately 175,000 55/1.2 lenses were produced during its 13-year run.  The Nikkor-S 55/1.2 was the first Nikon lens to be coated on all air-to-glass surfaces, and the Nikkor-S.C was the first to be multi-coated on those surfaces.  This is a large lens, so despite sharing a 52mm filter thread, the hoods for the 50/1.4 lenses will not fit around the barrel when mounted in reverse for storage.  Matching lens hoods, labeled for the 55/1.2, were available for separate purchase from Nikon, but are not commonly seen these days.

So what do I think after a couple months of playing with this baby?

First off, it's soft.  You'd expect low resolution wide open at f/1.2.  After all, you don't buy an f/1.2 lens because it's tack sharp; you buy it because it can see in the dark and give razor-thin depth of field.  The lens gets noticeably sharper at f/1.4, but even there, it's still softer than my Nikkor-S NKJ 50/1.4 lens, which is five years older than this 55/1.2.  By the time you stop the S.C down to f/2, it's finally on par with the NKJ at f/1.4.  You have to stop the S.C down to f/5.6 (4.5 stops down) before it's finally giving my wide open Pentax Super-Takumar 50/1.4 a run for its money -- and the Super-Tak is seven years older than the S.C.  (Takumars had a good reputation for a reason.)  Resolution on the S.C 55/1.2 peaks at f/8, and stays good through its smallest aperture of f/16.  At all apertures, sharpness drops off a little toward the corners (on a 1.6x crop sensor), but not as far as you might expect.  It's a relatively consistent lens corner to corner.  Below are links to full-frame test images at each full stop of aperture, plus one test shot from my Super-Tak wide open at f/1.4.

But as I stated earlier, sharpness isn't why you buy this lens.  The depth of field really is fun to play with.  The additional half stop beyond f/1.4 is noticeable.  Focusing accurately at f/1.2 can be a challenge (do not underestimate the gravity of that statement), but once you nail it, you can get some pretty cool portraits with the selective focus that f/1.2 provides.

Here's a few more examples of the depth of field.  Note how much tighter it is at f/1.2 than at f/2.8.  Even f/2.8 is considered fast by today's zoom standards. 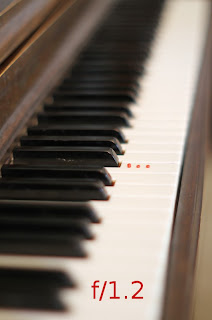 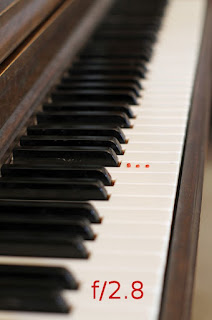 The bokeh is nice and creamy, but out of focus highlights tend to have a sharp, bright ring around them.  Compare these two back-lit photos of rose bushes taken at f/1.2 and f/8.

There's no noticeable chromatic aberration, even with the sun or lights shining into the lens.  That speaks well of the the new coatings that this Nikkor-S.C lens received. 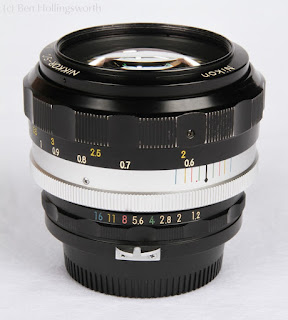 Aesthetically, I like the lens.  I'm quite fond of the scalloped focusing ring that both Nikon and Pentax used in the mid-1960's to mid-1970's.  I also like the silver accent rings sported by most Nikkors of this era, as they make the lens more eye-catching than the all-black lenses of today.

As "fast 50" lenses go, this thing is a behemoth, dwarfing the other normal primes in my collection.  The diameter of the aperture and front glass kind of require that, I suppose.  It still manages to utilize Nikon's standard 52mm filter threads, thankfully.  While it's heavier than most 50's, it is still a 55mm prime, and as such is still lighter at 410g than any decent quality zoom lens (but not my plastic Canon 28-80mm kit lens, of course).  By comparison, my Super-Tak 50/1.4 weighs only 230g.  Canon's modern 50/1.2 (Nikon doesn't make an AF version) tips the scales at 545g.

Ergonomically, the lens is easy to focus, with the focusing ring sweeping about 190 degrees from minimum to infinity.  The front lens barrel extends about 3/16" (4mm) through that range.  Despite its age, the focus ring on my copy turns very smoothly, with just the right amount of resistance. 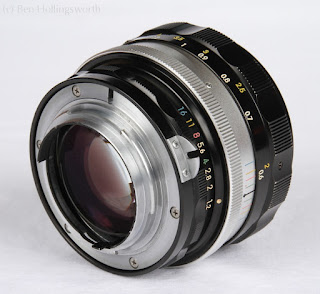 The aperture ring, which is hidden back by the camera body behind the larger diameter main lens barrel, is still easier to access than most lenses thanks to its scalloped grip that runs the full diameter of the ring.  I wish more lenses were made like that!  (I'm looking at you, Pentax & Yashica.)  That ring has detents at f/1.2, f/1.4, and (like most Nikkors) every full stop thereafter up to f/16. 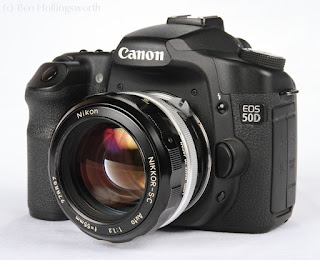 I used this lens on my Canon 7D, which has a 1.6x crop sensor.  Some lenses have trouble with mirror clearance on full-frame Canon bodies, but this 55/1.2 clears just fine according to the official list.  You can mount it using any standard Nikon-to-EOS lens adapters.

The copy of the lens that I used had a tiny bit of fungus somewhere in the rear elements.  It's worth noting here that the rear element groups were serviced as a single unit, not individually.  If you find a need to tear open this lens for repair, that could be significant.

Remember that I tested this lens on extended loan from a friend.  Would I buy one myself?  Certainly not for the $300-400 that they fetch on eBay.  I only paid $40 for my Super-Tak 50/1.4, and it spanks this 55/1.2 in both sharpness and convenience.  There's no way I'd pay an additional $300 for a half stop of aperture with worse image quality.  Then again, simply owning an f/1.2 lens will probably win you the respect and admiration of some of your photographer friends, so if that's your goal, this lens may be a decent option -- especially if you've got a Nikon body.  If you have the flexibility that a Canon EOS, Four Thirds, or mirrorless body affords, I'm told you can get better results from either the Minolta Rokkor-X 58/1.2 or the Canon FL 55/1.2 lenses than you'll get with this Nikkor-S.C 55/1.2.  The Canon sells for about $100 less; the Minolta for $100 more. 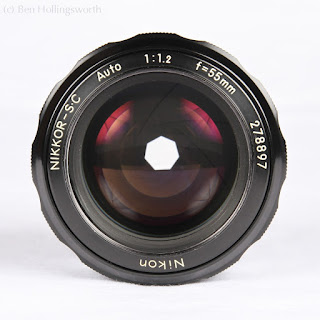 Below are a couple more resources for this lens that you may find interesting:

An excruciatingly detailed, in-depth history of this lens by Nico Van Dijk can be found at mir.com.my.  There's also a similar page on that same site.

Another review of this same lens can be found on Tony Correa's blog.

Serial numbers and production dates for all Nikon lenses can be tracked at PhotoSynthesis.  Lens specifications can also be found there.

The FredMiranda.com forums are also a good resource for info on all sorts of lenses.  Here's three threads that discuss this 55/1.2:

This post is part of my "old glass" series, wherein I elaborate on the various manual focus lenses that I've grown to love.  You can read an introduction to the subject in an earlier post.  Previously, I've covered the SMC & Super-Takumar 50/1.4 mentioned above, my Tamron 90/2.5 macro, and my Yashica 75-150/4 zoom.

If you've got any comments or suggestions, please speak up in the comments section below.  I always love to hear from my readers.
Posted by Obi-Wan at 11:58 PM