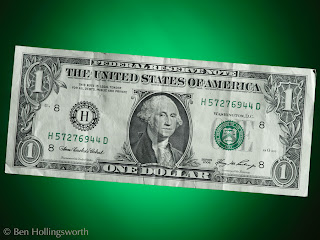 If you can't tell already, I'm a teacher at heart.  Whether it's via one-on-one conversations or published text, I love to help people learn.  One good way to bring newcomers up to speed is to explain how I obtained a certain effect in my photos.  The first of these "behind the scenes" (BTS) scenarios describes how I obtained the "money shot" used to illustrate a previous blog post about David Hobby's business advice.


When I first got the idea for that blog entry, I immediately knew what sort of illustration I wanted for it.  It was a pretty simple setup, and it played out surprisingly smoothly, so it makes a great example of an off camera lighting setup.

The blog post is all about making money, so I wanted to have a dollar bill shown in some interesting light.  My first thought was to have it floating in the air, with a soft-edged spot in the distant background.  American currency has a "green" connotation due to the ink used on the back side, but the front side is largely black & white.  To carry the green idea, I decided to make the back light green. 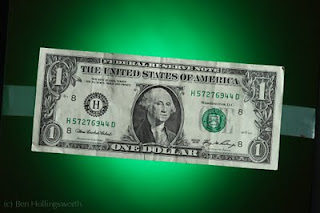 The hardest part of this shot was figuring out how to suspend the bill in thin air.  I ended up using a spare 8x10" picture frame and taping the bill to each side of it.  The tape would have to be cloned out in post, but that was pretty simple.

The background spot was easier.  I threw a white bed sheet (one of my standard backdrops) over the window curtains in my dining room.  On the edge of the table sat a flash (my Canon 430EX), zoomed to 105mm and wearing a tight DIY grid made from drinking straws.  That produced the nice, tight light pattern on the sheet a few feet away.  To get the green color, I placed a dark green gel from my Roscoe Strobist kit over the flash.  That eats a lot of power, but I had plenty to spare and ended up setting the flash at 1/8 power.

With the background set, I placed the bill holder (picture frame) on edge at the opposite side of the table, about five feet (1.5m) from the background.  Rather than rearrange my wife's sewing project, I integrated her machine into my setup.

The bill itself was lit with a second flash (a Vivitar 283 modified for manual power control) on a stand to camera right.  I kept the light off the background with a snoot made from a sheet of black foam rubber from the craft store, held onto the flash head with a monster rubber band.  Because this flash was a bare, I dialed it down six stops to 1/64 power.

I initially had the light pointing relatively straight at the shiny, new bill, but that made it look flat and dimensionless (it is just a piece of paper, after all).  I wanted to give it a bit more texture.  I therefore moved the light off to the side so that it struck the bill at a shallower angle, thereby highlighting whatever folds and textures existed.  This gave the bill a much more 3D feel.  The shallower the angle, the more texture you'll get.  I chose to put my light about 20 degrees off the surface, as seen by the shadows on the table in the setup shots above and below. 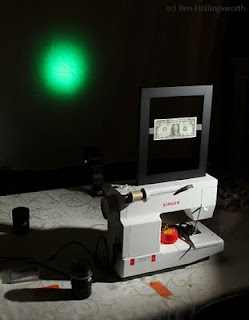 I used a 135mm f/2.8 lens for this shot.  That's it sitting on the table in the foreground at left.  Wide open at f/2.8, it has a razor thin depth of field that would remove any wrinkles or texture that might have been visible in the background sheet.  I actually closed it down to f/5.6 so as to hit the sweet spot for sharpness on the lens, but that still left the background plenty smooth.  I love that old, manual Nikkor lens, BTW.  Someday I'll talk more about using manual focus glass on Canon bodies...

I initially tried to hand hold the camera, but quickly found that lining up the camera so that the green spot was centered behind the bill was more challenging than I expected.  Out came the tripod.  The ability to accurately adjust the height in small fractions of an inch really helped.  It's not like I needed the tripod for image stabilization, of course.  The flashes fire so quickly that any vibrations from my hands would be imperceptible.

Incidentally, for this type of shot, you want to reduce the effects of the ambient light as much as possible.  I needed the overhead room lights to work and focus by, but dialed the camera down to ISO 100 and 1/180s, which eliminated any effect they may have had in the resulting photos.  For the setup shot below, I actually lit the room with a third flash (another Vivitar) bounced off the ceiling.

Once again, here's the final shot of the entire setup so you can see how it all came together:


If you've got any questions or comments, please speak up below.  I'd love to hear from you!
Posted by Obi-Wan at 11:43 PM