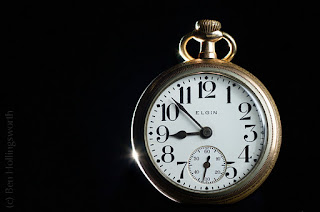 For my previous blog post, I wanted a photo of a watch -- and I wanted it quick.  My son is the latest owner of an old, well-worn pocket watch that originally belonged to my great-grandfather, and I figured that would be a perfect subject for my shot.  I was able to throw together a graphically-simple image using a single flash and some found props to create just the right image straight out of the camera.

My goals?  I wanted a tight shot of the watch on a solid black background.  I wanted the face of the watch lit smoothly with a crisp rim light to show off the gold casing.

The small size of the subject meant I could work in close, so I didn't need a big set or large lights.  The crisp rim light and the soft key were accomplished by using just a single speedlight.  I placed the speedlite with a grid a few feet behind the watch to produce the rim light.  In front of the watch, just out of the frame, I placed a large sheet of white styrofoam that I frequently use as a reflector for small subjects.  Since the reflector is many times larger than the watch and has a very matte surface, it produces a wonderfully soft key light when the rim light is bounced off it.  Two lights for the price of one! 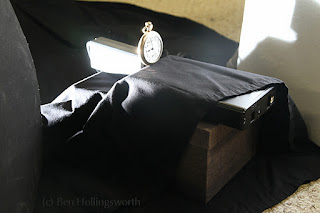 You do have to be careful when positioning the lights around a reflective surface like the beveled glass watch face so as to minimize any reflections.  Due to the orb-like shape of the pocket watch, it was difficult to remove all reflections, but I managed to keep them to a minimum by placing the key reflector off to one side.

The black background came courtesy of a black, king-size bed sheet that I sourced some time ago for just such an occasion.  Although it's black, the sheet doesn't eat light quite like velvet would, so you still have to keep the light off it in order to keep it pure black.  Remember that lighting is all about proportions, not specific values.  Because I was shooting in so close, I was able to put my reflector just inches away from the watch.  By comparison, having the background a foot or two past the watch dropped the light hitting it to an insignificant level.  Having the background that far back while using a medium aperture on my lens also forced the background entirely out of focus.  Voila, a smooth, solid, black background.  If I had tried to light this by bouncing the flash off the distant ceiling, the background would have received nearly the same amount of light as the watch and would therefore have been very visible in the shot. 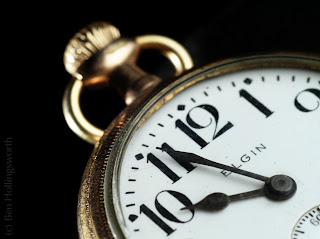 I still needed to get the watch up off the floor.  For the lying down shot (at right), the watch was lying on its back, so I needed a tall-ish platform on which to set it so that the background remained a good distance away.  A nearby box fit the bill.  Positioning the watch to hang over the corner of the box hid the box from view.

For the full-face (title) shot, I had the watch sitting vertically, supported again by some objects I found nearby.  I needed something to support the watch upright, but couldn't find anything sturdy enough that was also small enough to hide behind the watch.  I opted to set the watch up on a spare hard drive enclosure and support it from behind with a "wall wart" electrical plug.  I resigned myself to cloning the wall wart out in post, which is pretty easy since the watch is perfectly round and the background is pure black.  The flash is flagged from hitting the lens by a large sheet of black foam standing on edge.

I'd like to point out that these settings were made "from the hip" without checking a light meter, and they turned out to be perfect on the first shot.  After you've been shooting full manual for a while, you develop a pretty good intuition about which settings are needed for a given situation.  There's no substitute for your own experience.

So there you have it:  a pretty simple recipe for a quick, easy, and good looking product shot.  It literally took me longer to type this up than it did to create the shots.  I hope this shows that it certainly doesn't take lots of expensive gear to produce great shots with a few Strobist techniques.  What's important is that you know how to use what's available.

If you like these behind the scenes explanations, you can read more of them here and here.  The Tamron lens used for this shoot was highlighted in this post.

If you've got any comments or suggestions of your own, please post them below.  We always love to hear from you!
Posted by Obi-Wan at 9:31 PM